Sayed Shah Sharifi worked as an interpreter for Canadian combat Troops and was one of the many in both Afghanistan and Iraq who risked death threats to himself and his family as he worked alongside our coalition Troops.


Sayed Shah Sharifi hoped his family would be safer with him gone.

Sharifi is a young Afghan we've spoken to several times. He worked as an interpreter for Canada's soldiers during the combat mission in Kandahar.

Afterwards, that work led to death threats. Canada set up a special visa program for Afghans at risk because of their work alongside our troops. Mr. Sharifi applied, but was rejected. Twice. Immigration Canada couldn't find what they called "a consistent threat narrative.


Then the Toronto Star dug up Mr Sharifi's story.


Other journalists followed suit, and, last year, Mr. Sharifi got his visa. He arrived in Toronto, last summer, full of hope.


Then, last week, he got the news from Kandahar. Five members of his his family were dead.

From the Toronto Star:

Sayed Shah Sharifi fought to come to Canada, saying the Taliban threatened to kill him and his family because he was an interpreter for Canadian forces. This month, five of his relatives were killed by a roadside bomb. Three were children.

When Sayed Shah Sharifi’s family heard that distant relatives had been killed in a roadside bomb attack, they decided to pay their condolences to the survivors. On the morning of May 13, seven of them set off from Kandahar for their ancestral village of Maruf, a remote and violent district about 100 kilometres away.

But sometimes in Afghanistan, tragedy begets tragedy. As they reached an area local residents call “horror valley,” their 4x4 vehicle hit a roadside bomb. Five were killed. Two were injured.

The improvised bomb was set up by the Taliban to punish Sharifi for once working as a combat interpreter for the Canadian military in Kandahar.


Sharifi is safe in Canada.

Instead the militants took their revenge on his beloved sister, on his brother’s wife, and on his niece and two nephews, aged between 8 months and 4 years. His nephew Sharif Khan, 5, was badly hurt.

“Everything that happens is God’s decision, right? He decides what to do,” said Sharifi, his voice breaking with emotion. “Everybody’s gone. Shafeeqa was my best friend and close sister.”...

Unfortunately, Mr Sharifi's story is not unique as it appears that the very countries these brave Afghans and Iraqis have worked for,  have reneged on their promises to guard them and their families in return for their commitment to our Troops and their mission.


As It Happens has done a few interviews over the years with both Mr Shafiri and indeed some of the Canadian Troops who, upon their return to Canada, have lobbied tirelessly to have governments uphold their promises to ensure safe passage and a new life in our countries they have served so selflessly.


I remember a few years back getting a phone call from a US base in Iraq. One of my deployed American Soldiers had called me - as he often did - because his interpreter had insisted he wanted to talk to a British/Canadian who supported the American Troops. The Iraqi thought this was amazing - and hilarious!


What followed was an hour long conversation with a young interpreter who daily risked his own life, and that of his young wife and children, because he believed in helping our Americans in their goal of making Iraq a better place for fathers and mothers to raise their children in peace. Amidst all the laughter - and yes, there was lots of laughter as we talked together - this articulate Iraqi, whose English was better than a lot of native English speakers, shared the hazards of his life as he worked in the US base. We covered all manner of topics, not least of all was the danger he and others like him faced every day, as they knew they were on death lists because they chose to help us help them.  BUT what came through loud and clear to me was his belief in a brighter future for his country, and he was determined to continue serving alongside our Troops - at great personal expense - towards a freedom previously unknown under the Saddam regime.


This young man had NO intention of leaving his own country and taking up a government offer to resettle in the US, but did propose that I become his #2 wife and move there so I could teach his young wife my western wisdoms. I had to demur, of course, telling him I was SURE nowhere in Iraq was ready for the likes of me.  A whole  'nother story for another day.


Be that as it may, over the years I have watched with great interest (and increasing alarm) as our governments have mouthed empty platitudes about their commitment to these brave interpreters who have risked all - and yet, I am sure that Mr Shafiri's tragedy is not unique.  I have no doubt there are many other Shafiri's we never hear about, who have been killed because they chose the cause of freedom over the boot of tyranny.

And still the empty rhetoric from western governments continues.

Afghan interpreters to get right to live in UK 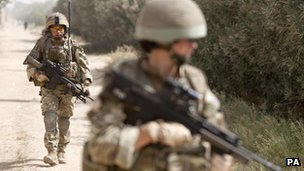 More than 2,000 interpreters have served alongside British troops since the war began

Up to 600 Afghan interpreters who worked alongside British troops are to be given the right to live in the UK.

The plan marks a climbdown from ministers who had decided they should not get the same UK resettlement rights as interpreters in the Iraq conflict.


A five-year visa will be offered initially to those who worked on the front line for a year or more - covering around half of interpreters.


But there were concerns that a large number of them could be excluded.


Many of the interpreters who will be helped say they have received serious threats to their lives, while some have already fled to the UK to claim asylum.


"One of my colleagues was captured, held for months and killed by the Taliban. They returned his body to his family in exchange for ransom," one former interpreter told the BBC.


"Ahmad" - who worked alongside British forces at Camp Bastion - said he had grenades thrown at his house and had to leave the job because the Taliban threatened to kill him.

Much more, with other interpreters' first person accounts included, here.

At that last link is a sidebar story, published back in February:

Is the UK abandoning its Afghan interpreters? 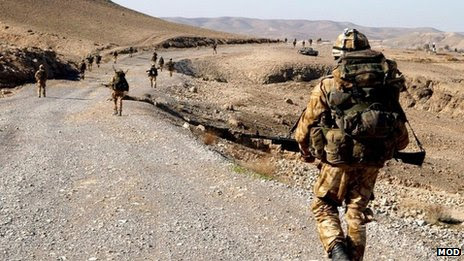 British troops rely on Afghan interpreters - but will they be left behind?

The American who has just relinquished command of all Nato forces in Afghanistan, General John Allen, says: "We have an obligation to look after them". But the Afghan interpreters who work for the British, often in battle and always in danger, feel they have been abandoned, reports BBC Defence Correspondent Jonathan Beale.

They interpreters are young men like Abdul, who is now in hiding. We arrange to meet him at an agreed location near Kabul.


As well as carrying his old Nato credentials he holds a folder with the death threats he says he has received. Fears for his own safety and that of his family have forced him to give up his job.


He shows the letters from the Taliban accusing him of spying and warning that he'll be punished. He says he received a similar telephone call the night before.


Abdul tells me that when the British leave he and the other interpreters who have worked for them will be the first targets. "They will chop our heads off," he says.


He has shown the same messages to the British authorities in Kabul, but so far he says his requests for asylum have been rejected. He asks: "What kind of proof do they need?" When he's dead, he says, it will be too late. ...


As the governments glibly declare the end of "combat missions" in both Afghanistan and Iraq, these interpreters have legitimate reasons to fear their fate at the hands of the terrorists. They have also more than enough reason to doubt the moral integrity of our governments who have agreed to ensure their safety in return for their unwavering service.


After years of talk talk talk it is more than overdue for our governments to fulfil their moral obligations.  Our governments MUST step up, cut the bureaucratic red tape, bafflegab and bs, and repay the loyalty of the brave men.  It is now more than imperative than ever that our governments keep their word and pay back on the loyalty these interpreters have earned, before more of them pay with their lives.


Time for our governments to quit talking, and to honour OUR commitments. These interpreters deserve nothing less. We DO have a moral obligation.
Posted by The Brat at 2:02 AM

The price of this war has been so great. So much has been given, under leadership without the fortitude and honor to lead. Politics, rather than national security interests and the ideals that will peace to our world, has been driving this endeavor against an enemy which is the common enemy of us all. What does it say of any nation to behave in this manner? To toss aside human beings when their usefulness is over fosters hatred toward our nations and their people. We tear down our liberties and security with our own hands.