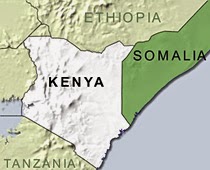 Al-Shabab continues their murdering ways.  Although this is not new - see War On Terror News for an ongoing  chronology of years of killing - the BBC reports the latest atrocity:

The attackers from the Somalia-based Islamist militant group separated Muslims from non-Muslims and shot the Christians dead, residents said.

Earlier, one person was killed in a bar popular with non-Muslims in a neighbouring district.

Al-Shabab killed 28 people in an attack on a bus targeting non-Muslims in the same area last week.

The attack on the quarry workers took place early on Tuesday. Witnesses said the victims were caught after midnight, while sleeping in their tents at the quarry....