Remember Alec's column last week on the 'down-sizing' of the British Military?  Refresh your memory:I hate to say I told you so but... I bloody told you so!


Now comes news that the Russians are again (still?) exploring British vulnerabilities in the skies.  From Daily Mail:

Russian bombers in the skies over Bournemouth: RAF jets scramble to intercept intruders

Typhoon jets on high alert were dispatched from two RAF bases and flew alongside the long-range Russian Bear aircraft until they were out of the region.

Last night experts said Vladimir Putin’s move to send planes capable of carrying cruise missiles so close to British shores could be seen as an act of aggression. 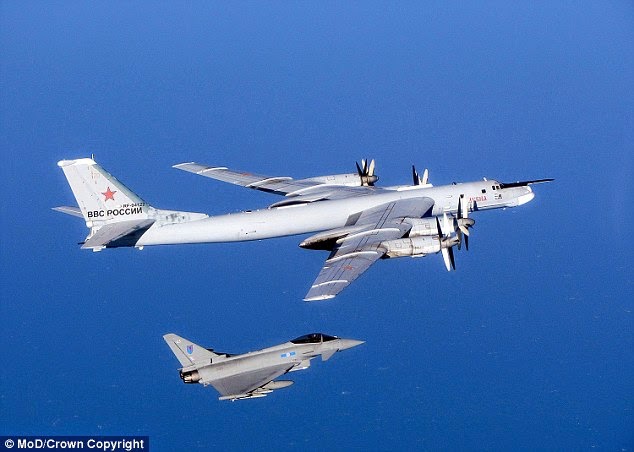 Off you go: A Russian Bear is escorted by an RAF jet during an alert in September. (File picture)


They said the manoeuvre in the English Channel could have been designed to ‘probe the RAF speed of reaction’ – raising fears that the Russians were looking for weaknesses in the British fighter force.

Within seconds of the bombers deviating from their usual flight path, the British quick reaction alert (QRA) jets were scrambled.

A defence source said the RAF always ‘maintains the highest level of readiness’, just as in the days of Battle of Britain.

The Typhoons were dispatched from RAF Lossiemouth in Scotland and RAF Coningsby in Lincolnshire. They were so close to the Russian planes – roughly 1,000ft away – that they could signal to the pilots....


Pay attention.  There WILL be more of these sorties - guaranteed.

Email ThisBlogThis!Share to TwitterShare to FacebookShare to Pinterest
Labels: RAF, Russia over Britain