Hello? Can you hear me? I know you're out there!!! 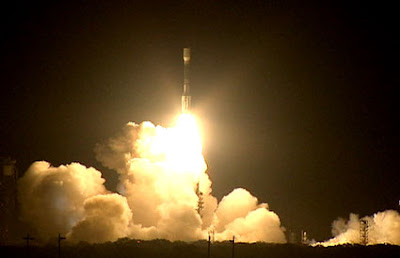 The Delta II rocket carrying the Kepler planet-hunting spacecraft lifted off on time at 10:49 p.m. EST from Launch Complex 17-B at Cape Canaveral Air Force Station in Florida. The launch followed a smooth countdown free of technical issues or weather concerns.

For up-to-the-minute reports from the launch site, check out NASA's Launch Blog.


The Kepler spacecraft will watch a patch of space for 3.5 years or more for signs of Earth-sized planets moving around stars similar to the sun. The patch that Kepler will watch contains about 100,000 stars like the sun. Using special detectors similar to those used in digital cameras, Kepler will look for a slight dimming in the stars as planets pass between the stars and Kepler. The observatory's place in space will allow it to watch the same stars constantly throughout its mission, something observatories such as NASA's Hubble Space Telescope cannot do. Here are some quick facts about the Kepler mission, scheduled to launch March 6, 2009:

-- Kepler is the world's first mission with the ability to find true Earth analogs -- planets that orbit stars like our sun in the "habitable zone." The habitable zone is the region around a star where the temperature is just right for water -- an essential ingredient for life as we know it -- to pool on a planet's surface.

-- By the end of Kepler's three-and-one-half-year mission, it will give us a good idea of how common or rare other Earths are in our Milky Way galaxy. This will be an important step in answering the age-old question: Are we alone?

-- Kepler detects planets by looking for periodic dips in the brightness of stars. Some planets pass in front of their stars as seen from our point of view on Earth; when they do, they cause their stars to dim slightly, an event Kepler can see.

-- Kepler has the largest camera ever launched into space, a 95-megapixel array of charge-coupled devices, or CCDs, like those in everyday digital cameras.

-- Kepler's telescope is so powerful that, from its view up in space, it could detect one person in a small town turning off a porch light at night.
Find this article at:http://www.nasa.gov/mission_pages/kepler/news/keplerf-20090305.html

(Source for all this info: NASA here)

I will NEVER lose the sense of awe and wonderment every single time NASA launches another mission. Every mission embodies the absolute best of human endeavour.

Hamlet:
What a piece of work is a man, how noble in reason, how
infinite in faculties, in form and moving how express and
admirable, in action how like an angel, in apprehension how like
a god! the beauty of the world, the paragon of animals—and yet,
to me, what is this quintessence of dust?

Oh, Brat, I do love me some NASA. LOL! I was in elementary school when Russia put Sputnik in orbit, and I remember the absolute outrage we kids felt because the US wasn't the first. It was so wonderful to witness the space program in my lifetime. I still get the chills when one of those big babies launches!