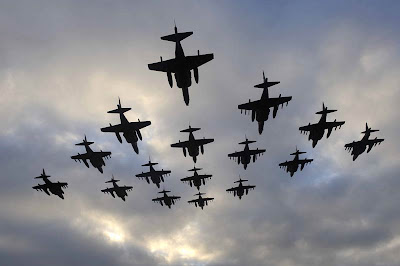 Today tributes were paid to the joint force of Royal Navy and RAF Harrier aircraft, with a spectacular flypast to mark their retirement after 41 years of service.

A formation of 16 Harriers took off from RAF Cottesmore and took to the skies of Lincolnshire.

Brought into service in 1969 and based at RAF Wittering, this British aircraft was designed to take off and land both vertically and on a short runway.

Well known for its role in the Falklands War, the Harrier went on to serve in many other conflicts including in Bosnia and Iraq in the 1990s.

The RAF and Royal Navy Harrier squadrons joined forces in 2000 to form Joint Force Harrier, based at RAF Cottesmore. These combined Harrier squadrons served in Sierra Leone, the second Gulf War and most recently Afghanistan.

“The Harrier is a true icon and stands testament to the innovation and excellence of British design and engineering, and the skill and courage of our airmen.

“It has had a truly distinguished service with both the RAF and the Royal Navy, from the South Atlantic to the skies over Afghanistan. It now takes its place in history as one of aviation's greats."

“The Harrier leaves UK service after an illustrious career that has seen it contribute to every major conflict in the last 30 years. It has been an enormous personal privilege and honour to have been involved with this wonderful aircraft for nearly 20 years, at sea and over land, at peace and in conflict.

“I will forever be immensely proud to be able to say I have been a Royal Navy Harrier Squadron Commander.”

“As the last Harrier Force Commander, it has been a real honour to ensure that the Harrier has been retired from service with all of the respect and dignity deserved.

“Today has been a tribute to everybody involved with the Harrier family.” 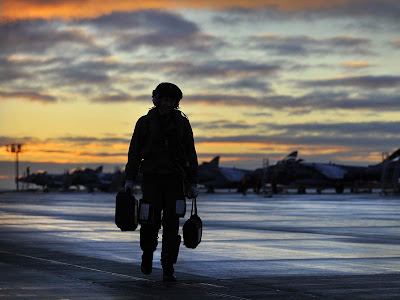