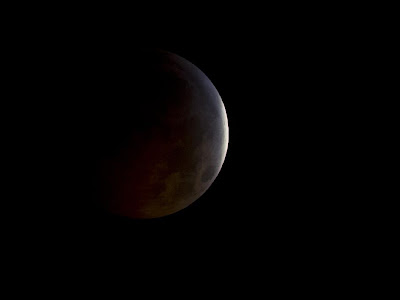 A total lunar eclipse is seen as the full moon is shadowed by the Earth on the arrival of the winter solstice, Tuesday, December 21, 2010 in Arlington, VA. The eclipse lasted about three hours and twenty-eight minutes.

A lunar eclipse occurs when the Earth lines up directly between the sun and the moon, blocking the sun’s rays and casting a shadow on the moon. As the moon moves deeper and deeper into the Earth's shadow, the moon changes color before your very eyes, turning from gray to an orange or deep shade of red.