RAF Marham based Chief Technician Nigel Aitkin (46) is about to return home to the UK at the end of a 3 month tour as the Senior Non Commissioned Officer in charge of the Tri National Ammunition Supply Point at Kandahar Airfield. He passed through Camp Bastion on his way back only to bump into his son, Senior Aircraftman Rhys Atkin (25) who has just started his tour here working in the Visiting Aircraft Handling Section (VAHS). 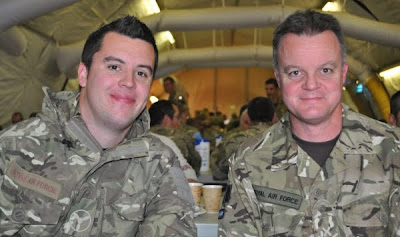 Nige is an Engineering Weapons Technician, currently working at RAF Marham in Norfolk as part of 93 (Expeditionary Armament) Squadron. He has been deployed at the Kandahar Air base as part of 904 Expeditionary Air Wing which operates the Tornado GR4 aircraft in support of troops on the ground across Afghanistan, including Helmand province. It’s Nige’s 5th tour of Afghanistan and by February next year he will have completed 30 years military service.

His son Rhys, the eldest of 3 brothers, is also stationed at RAF Marham, he has just arrived to begin a 4 month tour working in the VAHS at Camp Bastion as part of 903 Expeditionary Air Wing, handling the many different types of aircraft that fly into Camp Bastion on a daily basis. He has previously been deployed to Al Udeid. He said: “It was a nice surprise to catch up with Dad, we’re used to seeing each other regularly at home and with our tours overlapping it was likely that we would miss each other and not catch up again until next year”....