CPT Rob Yllescas graduated to Heaven on December 1, 2008. Left here was his much loved wife Dena, and their two precious little girls, Julia and Eva. I first 'met' this family online in November, 2008, as Dena wrote a blog of CPT Yllescas' valiant fight to live, after he was wounded in the sandbox of Afghanistan. The column Dena wrote on December 1, 2008, was one of the most gut-wrenching I have ever read. Please - if you don't know this family - go read Dena's column here: Rob is with God now.

I have since followed their progress as they have created a new 'normal' as a family, even as they KNOW that their daddy/husband is - as Dena put it in that column "..an angel looking over us. " 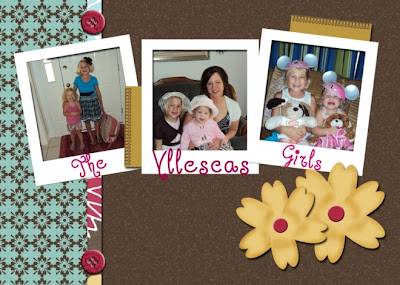 Dena and her girls leaped into my mind and my heart the night we all heard the news of Osama bin Laden's death. And then, I got an email telling me of Dena's latest post. In her column, Dena shared conversations she has had with her young daughters about Osama bin Laden. . She gave me permission to reprint it here.

File this under 'Out of the Mouths of Babes':

The death of Usama Bin Laden was definitely an emotional day for me. I finally felt like I had some closure. This horrible man who was the mastermind of the murders of so many innocent people on 9/11 and the military men and women who lost their lives fighting this war on terrorism has finally had his day of judgement. Before he left for Afghanistan, Rob looked at me and said “We will hunt Bin Laden, we will find him and we WILL bring him to justice”. Through bravery, determination, and endless perserverance, our US soldiers did hunt him, did find him, and DID bring him to justice. I’m sure most parents had a hard time explaining UBL’s death to their children. This was not the case in our house. We had a magnet on our fridge at one time that had a photo of UBL stating “Wanted dead or Alive” with a monetary award listed on it. Eva used to ask who this man was. I told her it was a very bad man. She asked “The bad man who killed daddy?” Well, in all actuality, yes. So, every time she would walk by the fridge she would say “This is the bad man who killed daddy. He’s not nice.” So, I decided to take down that magnet. But the morning after the news broke of UBL’s death, this is the conversation I had with Julia: “Julia, do you remember that magnet we had on the fridge of the bad man?” “Yes.” “Well, the soldiers finally found him and now he is no longer on this Earth or able to hurt anyone ever again.” “I’m sure daddy and God helped with that.” Again, she never ceases to amaze me with her insight and wisdom. ☺ Although UBL is gone, I’m still very nervous about the aftermath effects of this. This is far from over. I continue to pray that every service man and woman fighting this war makes it home to their families safe and sound. I am so proud of each and every one of them. So, Rob, you can stop rolling in your grave now. Justice has been served. Your mission is complete. I love you.

To read this specific column, and to learn more about this amazing family of Heroes, go here.
Thank you, Dena for sharing your journey with all of us. You and your girls continue to inspire me every single day.

Rest In Peace now, CPT Yllescas.
Posted by The Brat at 2:22 PM