A must read speech! 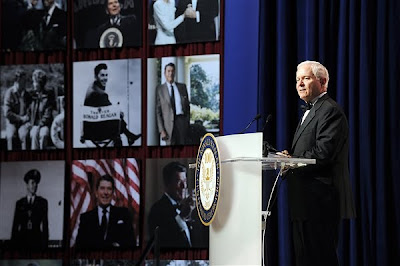 WASHINGTON, May 25, 2011 – At a gala here to celebrate what would have been Ronald Reagan’s 100th birthday, Defense Secretary Robert M. Gates quoted the 40th president on the importance of sustaining U.S. military power.

“As President Reagan once observed,” Gates told an audience of more than 500, “‘of the four wars in my lifetime, none came about because the United States was too strong.'”

The Ronald Reagan Centennial Gala is part of the two-year-long celebration to commemorate the centennial of Ronald Reagan, who was born in February 1911.

In the audience was British Defense Secretary Liam Fox, along with members of Congress and the diplomatic corps and others who served Reagan's presidency.

Fox brought a message from former Prime Minister Margaret Thatcher, who said she was “with the audience tonight in spirit on the momentous occasion of this wonderful man” and great president.

Fox called Reagan and Thatcher “giants of history at a time when history needed giants.”

“It’s altogether fitting that the theme of these centennial celebrations is ‘Inspired Freedom, Changed the World.’” Gates said.

“And while President Reagan’s domestic initiatives fundamentally changed the politics and government of this country,” he added, “as defense secretary for at least a few more weeks, I’d like to focus my remarks tonight on how he brought that slogan to life abroad.”

In the decade before Reagan took office, Gates said, there had been a bloody takeover in Vietnam and millions of deaths across Southeast Asia, “stagflation,” two energy crises and the Soviet invasion of Afghanistan.

There was revolution in Iran, an embassy taken hostage and a failed rescue mission, he added. Also at the time, tens of thousands of Cuban soldiers were in Angola and Ethiopia, Nicaragua was fast moving into Cuba’s orbit and Cuban-supported insurgencies were in El Salvador and elsewhere in the region.

“Some of you here today remember what it was like to work in national security during that time, or any time during the Cold War -– always carrying a heavy burden, always facing an existential threat, not just to our country, but to the entire world.”

Reagan, nearly alone, Gates said, had the bedrock conviction that the Soviet system was “rotting from within” and could be brought down.

“He spoke blunt truths about the Soviet system and Soviet behavior. Remember the ‘Evil Empire’ speech in 1983? It drove Moscow nuts. No one spoke these truths with more credibility or more eloquence,” the secretary said.

The Reagan administration’s actions, overt and covert, gave hope to dissidents and millions of others trapped behind the Iron Curtain and let the world know that “America was back,” said Gates, who holds a doctorate in Russian and Soviet history from Georgetown University.

After the Geneva Summit in 1985, Reagan and the new Soviet leader, Mikhail Gorbachev, “between them set in motion developments that would ultimately lead to the remarkable turn of events,” Gates said -- “the fall of the Berlin Wall, the reunification of Germany, the dissolution of the Soviet Union, and the liberation of hundreds of millions of people behind the Iron Curtain.”

Reagan’s statecraft consisted of diplomatic, economic and military pressure combined with a willingness to parlay with his Soviet counterpart, Gates said. Today, he added, it’s a different world, but still a dangerous place.

“In many ways, geopolitics are much more complex than when two nuclear superpowers taunted and tested each other,” Gates said. “But communism’s demise holds lessons for us even now.”

Along with the importance of sustaining military power, the lessons include the enduring value and broad appeal of freedom and “the idea that free men and women of different cultures and countries can, for all the squabbling inherent in democracy, come together to ... make the tough decisions to deter aggression and preserve their liberty,” Gates said.

After a decade of war, weariness with conflict is understandable, he said, but a stand must always be taken against those who seek to dominate and intimidate others through violence.

“We saw this on 9/11. We see it today in Afghanistan, where more perseverance, more sacrifice and more patience will be required to prevent the terrorists who attacked us from doing so again –- though cutting off the head of the al-Qaida snake was definitely a big step in the right direction,” the secretary said to enthusiastic applause.

“We see it anywhere nations, movements or strongmen are tempted to believe that the United States of America does not have the will or the means to stand by our friends, to meet our commitments and to defend our way of life,” he added.

No one can predict the future or what impact today’s decisions will have over the next decades, he said, but history makes certain things clear.

“When America is willing to lead the way; when we live up to our responsibilities and stand with our allies, even in troubling times; when we prepare for threats … on … and beyond the horizon; and when we make the necessary sacrifices and take the necessary risks to defend our values and our interests,” Gates said, “then great things are possible and even probable for our country and the world.”