Soldier under fire in Afghanistan has SOS call answered by brother 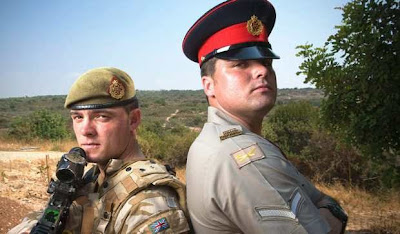 As enemy fire rained down from the Taliban, Michael Leather made a frantic radio plea for help – and was amazed to hear his brother answer the call.

Brother Jimmy directed the Ridgeback armoured vehicle he was in straight to the firefight, on the border of the Sangin and Musa Qala areas of Helmand province in Afghanistan.

“We were meant to be driving straight to the patrol base and waiting there ahead of an operation, but when I heard that they were under contact I flagged it up, and the others went ‘right, let’s go’.

“As soon as we pulled up in the Ridgebacks the fighting died down and they were able to come back to base.”

Less than 24 hours later, the brothers, who had not seen each other for eight weeks, combined again to face the Taliban. ... (more here.)

And in another article from the MoD:

Two brothers who recently fought alongside each other in Afghanistan and helped uncover an IED factory during a fierce firefight are keen to go back to the front line.

Lance Corporal Jimmy Leather, aged 28, and Lance Corporal Michael Leather, aged 22, both from 2nd Battalion The Duke of Lancaster's Regiment (2 LANCS), were recently serving together, along with Michael's brother-in-law Paul (married to Michael's twin sister Victoria), in Musa Qal'ah, on the border with Sangin.

The brothers, who hail from Stretford, Manchester, have previously served in Iraq together and know what it's like to fight side-by-side, as Jimmy explains:

"With fighting for your brother, and fighting with your brother, your family protective instincts kick in straight away and you want to be there. It was the same when we were in Iraq on TELIC 9 together. It just spurs you up even more."

These instincts were in evidence when Jimmy was making his way back to the patrol base in his Ridgback and he heard Michael's call sign over the radio saying they were under enemy fire:

"We had gone out on a little reassure patrol and got hammered," explained Michael.

For Jimmy, the response was immediate:

"We were meant to be driving straight to the patrol base but when I heard that they were under contact I flagged it up, and the others went, 'right, let's go'.

"As soon as we pulled up in the Ridgbacks the fighting died down and they were able to come back to base."

Despite the close call, the next day the brothers went out on a planned operation to move into a town being used to transport IEDs from Musa Qal'ah to Sangin. Michael said:

"I was in charge of one of the lead assault groups to go down to take the rogue town."

Jimmy was one of those providing support from the formidable Ridgback vehicle - a role he took on to enable him to stay in Afghanistan and continue serving alongside his brother and brother-in-law after a back injury he sustained in Iraq started to give him trouble again when he was out on foot patrol:


"After one or two hours my team came under constant RPG [rocket-propelled grenade] fire," continued Michael. "We knew we were going to get contacted, but we went around the rear of the village and found the insurgents' dug-in positions. They weren't expecting us.

"I moved my team onto the higher ground, but as soon as we got there we came under RPG and heavy machine gun fire. There were only four of us, so we moved down the hill with the RPGs firing on us to a ditch where we waited until we could get back up...

You just know there is more about these incredible brothers. Go here to read the rest.

Thank you both for your service, Lance Corporals Leather.