The New Zealand Defence Force has named the officer who was killed this morning as Lieutenant (LT) Timothy Andrew O’DONNELL from 2/1 Royal New Zealand Infantry Regiment (2/1 RNZIR), based in Burnham.

“Let me again reiterate the deepest sympathies of the Defence Force to the family of LT O’DONNELL, who has made the ultimate sacrifice in service of his nation,” Chief of Defence Force, Lieutenant General Jerry Mateparae said at a press conference this morning.

(Go here to read the full biography of this amazing young hero.) 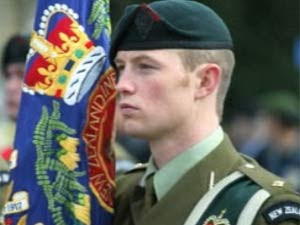 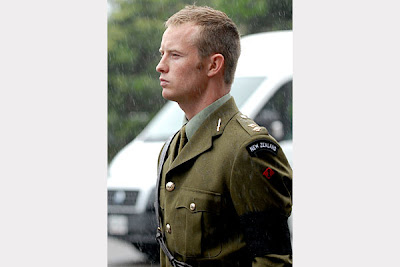 New Zealand suffered its first combat fatality in Afghanistan when a soldier died in an ambush that left another two New Zealand soldiers and an Afghan interpreter wounded, an official said on Wednesday.

New Zealand Prime Minister John Key said the attack would not hasten the withdrawal of New Zealand troops from Afghanistan.

"This is New Zealand's first combat loss in Afghanistan and reinforces the danger faced daily by our forces as they work tirelessly to restore stability to the province," Key said in a statement....

The New Zealand soldier killed in an ambush in Afghanistan was due to receive medals for his deployment there having already been honoured for his service in Timor Leste.

Lieutenant Timothy O'Donnell, 28, died when his patrol in the north-east of the Bamiyan province came under attack along a notorious stretch of road that borders the neighbouring and more violent province of Baglan.

Two other New Zealand soldiers were injured in the attack and are said to have serious, but not life threatening injuries, including burns, cuts and abrasions.

A local interpreter taking part in the patrol was also wounded.

O'Donnell has been described by the army as a highly competent and widely liked officer.

He was due to be awarded two medals as a result of his deployment to Afghanistan - the NZ General Service Medal (Afghanistan) and a NATO Medal. (tvnz)

The family of a Kiwi soldier killed in Afghanistan says they are numb following his death.

Lieutenant Tim O'Donnell, 28, was killed when his three-vehicle patrol was attacked with explosives, rocket propelled grenades and gunfire in north-east Bamiyan Province overnight.

Two other soldiers suffered serious injuries but are expected to survive. A local interpreter with the patrol was also hurt.

At a press conference at Linton Army Camp today, Mark O'Donnell said his son - honoured for his valour during a skirmish in East Timor - had wanted to be in the army since age four.

Mr O'Donnell said he talked to his son before he left for Afghanistan.

''I told him I wanted him to come home. He just laughed and patted me on the back.''

Lieutenant O'Donnell's uncle Barry O'Donnell said the Government should not ''turn tail and run'' because of one casualty.

''I don't think you can go into these ventures without thinking there is going to be casualties, and as soon as there is one, change your mind and run away.''

Mark O'Donnell said the army had a job to do in Afghanistan.

The family were feeling numb, with the devastation expected to set in over the next few days, he said.

Condolences from the Prime Minister and high ranking military officers had helped ease the pain....

"It would be fair to say that he was what could be described as a free spirit, he pushed boundaries. That was very much part of his personality."

He said: "This is the event we didn't want to happen."

The team in Afghanistan were "responding well, they are getting on with their business," he said.

"They're looking after the wounded, and Tim, and continue to provide a difference in Bamiyan."

Prime Minister John Key has also spoken to Lieutenant O'Donnell's mother and expressed his sorrow on behalf of New Zealand.

"Our sympathies are with the family. When I spoke to his mother she was clearly very proud of her young man and rightfully so. I think through his record he has demonstrated to New Zealanders that he's been utterly committed toward protecting our best interests and serving us with great distinction."

Mr Key said he would attend the soldier's funeral, though no formal arrangements have yet been made.

He said she had asked him to pass on her sympathies also to the family of the injured two.

"I think that shows extraordinary bravery and courage on her part and also the strength of the wider military family when such a tragedy takes place."...(source) 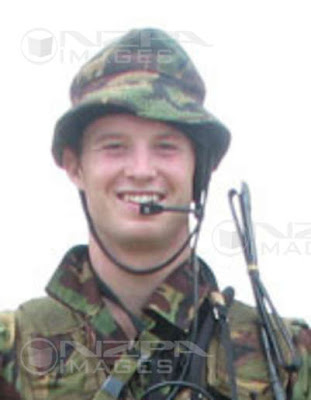 Email ThisBlogThis!Share to TwitterShare to FacebookShare to Pinterest
Labels: Some Gave All NZ Lt Tim O'Donnell