Islam is NO religion of peace!

Yes, I have written on this before. Today, though, a video came to me that lays out facts - in very simple terms - which explain why Islam can NEVER be considered a 'religion of peace. .' No matter how many times I hear the slurs of racist, Islamophobe, etc etc ad nauseum, the ugly, violent truth about Islam is too obvious, too well documented, to be ignored by any of us 'infidels.' Take a look:

A group calling themselves "White Roses" created this video to inform non-Muslims about Islam. The name of this video is Three Things About Islam.White Roses is headquartered in Sweden. This first version is in English.

The name "White Roses" is based on a student resistance group ( die Weiße Rose) in Nazi Germany. The group became known for an anonymous leaflet campaign, from June 1942 until February 1943, which called for active opposition to Adolf Hitler's regime.

(Wiki has a good synopsis - here - of this group, which is well worth reading. You can also check out the links, including an online Qu'ran, on the YouTube posting of this video here. )

[H/T my pal Mike for sending me that video.]

My long time readers may remember a column I wrote over on Tanker Bros a couple of years ago. Obviously, that was post-9/11, the most heinous atrocity on this continent by Islamic terrorists thus far. However, the litany of murder and mayhem proudly claimed by these practitioners of the 'religion of peace' leaves no doubt - for me, at least - that Islam is an ideology of global terrorism. Plain and simple.

WARNING: Some of the images on the videos presented here will cause your children (or YOU!) to have nightmares!


Let's talk about Muslims and Jihad today, shall we? This last week I have come across all sorts of information on what exactly will happen to all of us if we do not stay the course and WIN this Global War on Terror. Yes! TERROR! Candid confession: there are many days when I would love to pull the covers over my head and wait for this all to be over. Really, as the extent of the intentions of those who wage war on us all becomes clear, I really almost go into brain freeze at the enormity of the threat. But, the consequences of any of us doing that are so dire, that I know none of us can afford to ignore what is right in front of our noses. Suuuuuuuure, the Pelosi and Reid camps would have all us believe that if we have little "chats" with our muslim neighbours, the world will be at peace. Uhuh... Whateverrrrrrrrrrrr... 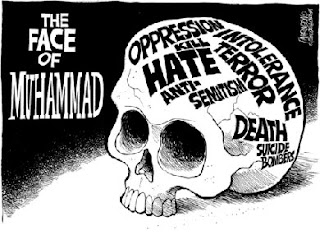 That is from Rob and Darby over at Patriotic Thunder. Pretty graphic huh? Well, it is not pretty, and it is not nearly as graphic as some of the stuff I have just seen. Patriotic Thunder has been spreading the word for quite some time now, and no matter what, they will go down fighting. Go over there and start reading. Here is a great place to start!


[In the original Tanker Bros post, I then posted a video that I call a 'Jihad primer.' Apparently YouTube decided to censor a very informative video on the basics of Islam, and it has been removed. Never mind. Read on]:

"It is the individual duty for every Muslim to kill Americans and their allies - civilian and military." Osama Bin Laden - 1998

"The goal of Jihad is world domination."

"Europe is the cancer. Islam is the answer."

Did I make those up? No, if you are at all awake, you KNOW I did not. These are actual quotes in a media presentation from the Terrorism Awareness Project. Yes, this presentation IS graphic, but if you even have a scintilla of doubt as to the intentions of the muslim extremists, you have to go here.

At that link, you will see every quote I just gave - and many more - plus documented, pictorial evidence of some of the places that jihad has already been waged with devastating effect.

In all, twenty eight incidents are highlighted on a map. In this media presentation called "What Every American needs to know about Jihad" - all of 4 minutes long btw - is undeniable evidence that this war IS global. You doubt that? Again:

"The goal of jihad is world domination."

By now, we all know that for a large percentage of the American population (the ignoramuses), there is nothing global about this war, because THEY are still going to the mall, as our troops wage war in a sandbox far, far away. A lot of Americans do not feel the direct impact of 9/11; a lot of Brits do not feel the impact of what happened in the London tubes that terrible day. A new slant on the NIMBY phenomenon. BUT, as this video clearly shows, jihad IS in all our back yards. Seventeen terrorist suspects arrested in Toronto a while back, and let's not forget the terrorist activities in Glasgow. Just this week, New Zealand police got in on the act:

I do have much more on Jihad 101, and you can find my column here at Tanker Bros.

Pat Condell has a few thoughts on the political correctness about Islam that will get us all killed.


"...Resisting Islam is not irrational. Pandering to it, IS irrational..."