Suicide in the US Military

Anybody who watches the Global War On Terror closely, knows that the reported number of suicides in the US Military continue to rise at an alarming rate. Department of Defense releases monthly figures (September here) and it is now being suggested we are losing more Troops to suicide than are being killed by the enemy.  Suicide has become an enemy of the US Military. This despite a very public effort by the leadership to prove they are addressing what is now a huge problem.

Rising rate of suicide: What would work & what does not 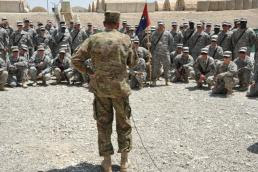 As some have begun to notice that the Army rate of suicides is increasing, I have been asked what I thought was the cause, and what could be done about it.  I'm not a shrink, but I do have experience in the Army, as a Private, as a Sergeant, and as Senior NCO.  I have sat through suicide prevention speeches & powerpoints.  I have seen the reactions of senior leadership to the problem, and of the Troops to the announcements of the "training," as well as the speeches themselves.  I can tell you that more speeches to the Troops is NOT the answer.

There is more than one reason that people choose the permanent solution of suicide to temporary problems, but one of the base reasons why a good number of them choose it is a feeling of worthlessness.  There are others who commit suicide to escape physical pain they know cannot be escaped any other way, or those that have otherwise lost the ability to control their own destinies.  Suicide is often triggered by a traumatic event, which can fester for years before culminating in a feeling of guilt that becomes insurmountable.

The rate of Army suicides climbed 25% after 2008, and is seeing an increase from that level this year.
It will not be fixed with more speeches.  The answer is not even one suicide powerpoint.  The answer is good leadership.  The answer is not management.  And that distinction, or rather the lack of it, is part of the problem.  A leader is a member of the group he is leading.  He's a part of the team.  He knows his teammembers.  They follow, because they know he's a part of that team.  A manager tells subordinates what to do.

A true leader will know the strengths and weaknesses, the prides and fears of his teammembers.  He has an interest in the lives of his teammates.  He asks about their health issues, not so he can prepare an answer for his boss, but so he can ensure he doesn't aggrevate the problem, but more importantly because he cares about his Troops.  True leadership can not be faked.  Those who feign interest are easily seen through, most of the time.  And true leadership has wained from my days as a Private.  There are some that can fake it for a short period of time, but Troops will see through the fakers and flock to real leaders.

And that focus on management in recent years, rather than leadership, in the Military is a part of the problem...

I do not have the answers to this awful trend in the US Military, and it seems the Military is clueless, too.  We really DO live in dangerous times, and seems to me, our Military leadership needs to step up and BE leaders.  Our young men and women deserve that, at the very least.

Email ThisBlogThis!Share to TwitterShare to FacebookShare to Pinterest
Labels: Suicide in US Military