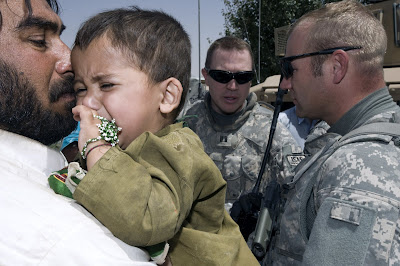 Senior Airman Felicita Torres-Perkins is an Air Force medical technician deployed to the Zabul Provincial Reconstruction Team, or PRT. The Zabul PRT is working with local heath officials in Qalat, Afghanistan, to combat the causes of the high infant mortality rate such as unsanitary water supplies and malnutrition. She is deployed from McGuire Air Force Base, N. J., and wears the scarf in an effort to honor the customs of this region of the country. (U.S. Air Force photo/ Master Sgt. Keith Brown) Download Full Image | E-mail a friend

Capt. (Dr.) James Arnold gives a food supplement to the mother of a malnourished Afghan child Aug. 9 at the Qalat Hospital in Qalat, Afghanistan. Dr. Arnold, along with other members of the Zabul Provincial Reconstruction Team, is working with local heath officials to combat the main causes of infant mortality such as unsanitary water supplies and malnutrition. Dr. Arnold is a family medicine physician at Anderson Air Force Base, Guam. (U.S. Air Force photo/Master Sgt. Keith Brown) Download Full Image | E-mail a friend

Photo by Keith Brown/Courtesy of the U.S. Air Force
Capt. James Arnold gives a food supplement to the mother of a malnourished Afghan child in August at the Qalat Hospital in Qalat, Afghanistan. Arnold and Capt. Tim Harrelson developed a nutritional paste that spared Afghan children from starving.

Heading into a 10-month deployment to Afghanistan a year ago, Capt. Tim Harrelson wanted to do something about malnutrition and infant mortality, but figured he would spend most of his time treating trauma and running sick call inside the wire.

By the time he returned to Misawa Air Base in Japan around Christmas, the physician assistant had helped develop a nutritional paste that saved many Afghan children from starving to death. The knowledge was left for local doctors and other provincial reconstruction teams.

"You get involved with a mission that can sometimes seem overwhelming in scope," said Harrelson, 38, of Indian Land, S.C., who was recently awarded a Bronze Star for his deployment efforts.

"It was greatly satisfying. In that situation, you hope you can leave a positive legacy. It doesn’t matter if your name is attached to it or not. What matters is it works and someone else can use it — and you get to where people can be happy and they can be healthy.

"I think that’s what helps establish peace in the region."...

Go read the rest of this story at Stars and Stripes here. This story actually made it to quite a few msm outlets. Just 'google' his name and meet other dedicated servicemen and women, making a difference every single day.