More snow than the north pole 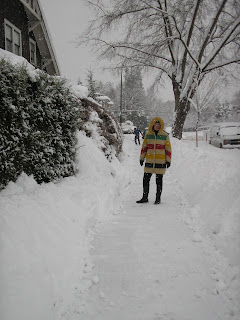 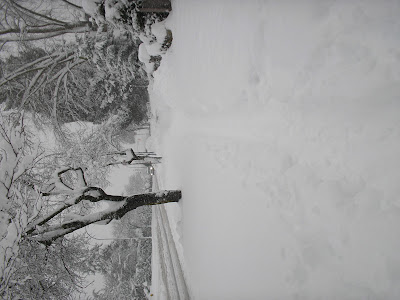 Where I live in Canada recorded more snow fallen than in the north pole over Christmas. Youch! (Okay I tried to download the picture properly, but you'll just have to look sideways...) And yes, we have had more snowfall since!

Then, out of London (the REAL London, not the Canadian one....) comes word that their temperatures today and tonight are colder than the Antarctic...:

Minus 10 - it's colder than the Antarctic

THE big chill today tightened its grip on London and the South-East with temperatures as low as -10C - colder than parts of Greenland and the Antarctic.

Refreshing dip: a swan braves the icy waters of the Round Pond in Hyde Park as London and the South-East endured a New Year deep freeze

The Met Office issued a severe weather warning for the capital. Emergency cold weather payments for 600,000 Londoners were triggered for the first time in a decade and only the second time ever.

Councils deployed fleets of gritters and the AA warned of a rise in the number of breakdowns.

Ice formed on the Serpentine and Grand Union canal and fountains in Trafalgar Square froze up.

The coldest temperature in England early today was -10C recorded at Farnborough in Hampshire, while several other towns recorded -7C.

The Met Office said it expected temperatures to be another degree lower tonight in many areas of the South as an unusually large high pressure system continues to dominate.

The plunge in temperatures is 10C below the norm for this time of year and compares with -4C in the Greenland port of Narsarsuaq. In Narvik, a Norwegian city inside the Arctic circle, overnight temperatures only fell to -5C, while the Icelandic capital Reykjavik saw much higher temperatures at 6C.

Regions of the Antarctic were warmer than London and the South-East, with the Casey Station in the Australian section of the continent recording temperatures of -0.7C.

Brendan Jones, a forecaster at MeteoGroup UK, the weather division of the Press Association, said: "Tomorrow in the South is going to be colder than tonight."

He said snow and sleet showers would be on their way by tomorrow. The Royal Society for the Protection of Birds has urged people with gardens to help bird life by putting out water with a ping-pong ball in it which prevents it from freezing.

London Minister Tony McNulty announced that pensioners and other vulnerable Londoners will get £25 a week emergency help towards their heating bills. "Cold weather payments are to be triggered in London for only the second time," he said. "Hundreds of thousands of people in the capital will now receive around £15 million."...

Go read the rest over at the Evening Standard here.

Email ThisBlogThis!Share to TwitterShare to FacebookShare to Pinterest
Labels: London below freezing

So much for Global Warming. It is snowing again here near Chicago.