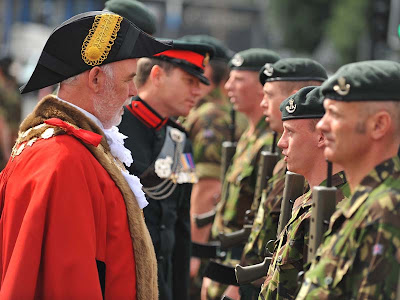 The Lord Mayor of Kirklees, Councillor Eric Firth, speaks to Rifleman Dean Bainbridge, on parade with 5th Battalion Royal Regiment of Fusiliers in Dewsbury, when The Rifles received the Freedom of the Borough [Picture: Mark Owens, Crown Copyright/MOD 2011]

The people of Dewsbury came out en-masse on Saturday to celebrate 3rd Battalion The Rifles (3 RIFLES) receiving the Freedom of the town from Kirklees Metropolitan Council.

Drums were beating and bayonets fixed on as two hundred and twenty soldiers paraded through the streets of Dewsbury before receiving the honour.

The parade was led with music from The Waterloo Band of the Rifles, and consisted of a marching contingent of soldiers from 3 RIFLES, and the 5th Battalion, The Royal Regiment of Fusiliers, as well as Army cadets and officials from the Rifles Regimental Association.

The parade began on Wakefield Old Road at 1100hrs before making its way to Dewsbury Town Hall where the Lord Mayor of Kirklees, Councillor Eric Firth, took the salute. Following the parade the soldiers and their families enjoyed a civic reception lunch in the Town Hall.

"The historic links between 3rd Battalion The Rifles, and the town of Dewsbury mean a great deal to us and we are both humbled and proud to be able to mark them with a Freedom Parade through the town centre. 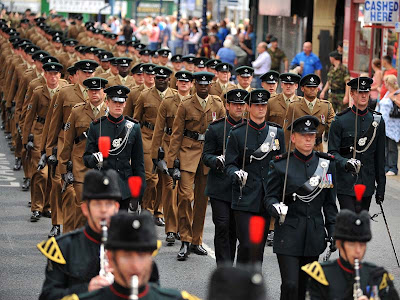 Email ThisBlogThis!Share to TwitterShare to FacebookShare to Pinterest
Labels: 3 RIFLES parades through Dewsbury