Afghan forces, supported by British troops, have uncovered more than four tonnes of illegal fertiliser, which is used by insurgents to make homemade explosives and improvised explosive devices (IEDs). 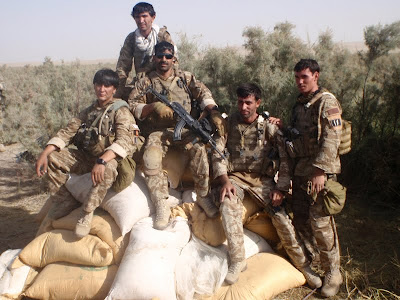 Afghan soldiers with the bags of fertiliser found in the Lashkar Gah district of Helmand province [Picture: Crown Copyright/MOD 2011]

Hidden in the Lashkar Gah district of Helmand province, the find of ammonium nitrate, an important bomb-making substance, is the biggest made in the UK's area of operations since 2006.

Acting on intelligence from the Afghan National Directorate of Security (NDS), soldiers from BOST 170, an elite arm of the NDS who focus on counter-terrorism, planned an operation out to an area called Khosh Kowa, around 20km east of the city of Lashkar Gah.

In total, sixty troops from BOST 170, partnered with Task Force Helmand's Brigade Reconnaissance Force (BRF), were airlifted in two Chinook helicopters to where the intelligence had suggested the cache was hidden....