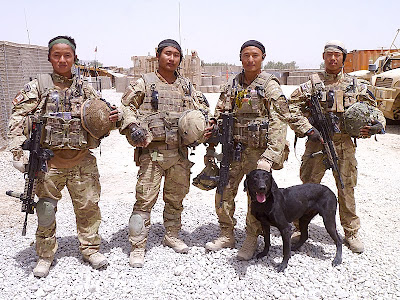 Hobo's back to work after surviving Taliban attack

A two-year-old black Labrador military search dog is back on the Helmand front line sniffing out improvised explosive devices (IEDs) after having recovered from serious injuries sustained during a battle with insurgents.

Trained to sniff out IEDs and lead patrols to safety, Hobo has been in Helmand for two months, saving the lives of countless soldiers and marines.

But, on a recent patrol in Nahr-e Saraj, the roles were reversed, and it was up to Hobo's patrol to save his life.

Hobo was deployed on an operation in the Nahr-e Saraj district of Helmand province when the patrol he was on came under sustained small arms fire and rocket-propelled grenade attacks. Led by Hobo, the patrol took cover in a compound to wait for back up, but, within minutes, a grenade had been thrown over the compound wall.

The insurgents had crept up through dense vegetation to the rear of the compound, unseen by the patrol's sentries. Hobo was resting flat on the ground, and the fragmentation flew over his head missing him completely, but then came a second, third and fourth attack, and Hobo was hit three times.

Captain George Shipman, serving with 29 Commando Regiment Royal Artillery, attached to A Company, 2nd Battalion The Royal Gurkha Rifles, was on the patrol that day. He said:

"There were four loud explosions, the dust was kicked up, and it was difficult to see what was happening. We realised quickly that Hobo had been hit. He was bleeding heavily from the base of his neck.... 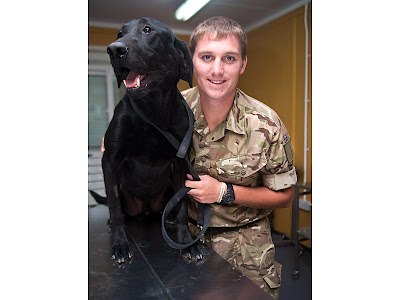 Email ThisBlogThis!Share to TwitterShare to FacebookShare to Pinterest
Labels: MWD Hobo in Afghanistan