NASA: A Pulsar and Its Mysterious Tail 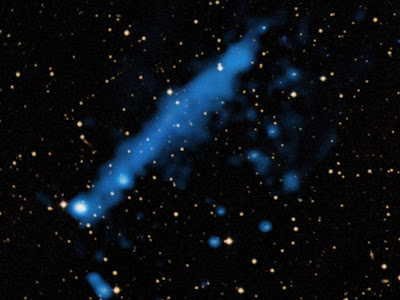 A Pulsar and Its Mysterious Tail

A spinning neutron star is tied to a mysterious tail -- or so it seems. Astronomers using NASA's Chandra X-ray Observatory found that this pulsar, known as PSR J0357+3205 (or PSR J0357 for short), apparently has a long, bright X-ray tail streaming away from it.

This composite image shows Chandra data in blue and Digitized Sky Survey data in yellow. The position of the pulsar at the upper right end of the tail is seen by mousing over the image. The two bright sources lying near the lower left end of the tail are both thought to be unrelated background objects located outside our galaxy.

PSR J0357 was originally discovered by the Fermi Gamma Ray Space Telescope in 2009. Astronomers calculate that the pulsar lies about 1,600 light years from Earth and is about half a million years old, which makes it roughly middle-aged for this type of object.

Email ThisBlogThis!Share to TwitterShare to FacebookShare to Pinterest
Labels: NASA Pulsar and its mysterious tail