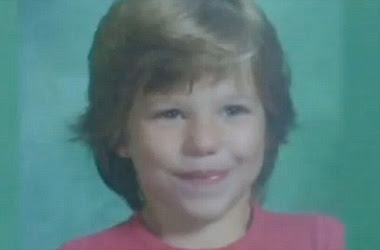 Take a long look at this picture. THIS is 10 year old Ame Deal, and as I started my first coffee today I learned that this precious child is dead: killed by those amoral 'adults' whose moral responsibility it was to care for her. Those adults are now in custody, as Ame's short life of hell is over.

As I read details of how neighbours knew - but did nothing; as I listen to a coalition soldier describe the lives of young Afghan children shown kindness by our troops, but still whose pervasive culture raises them to be terrorist killers; as I absolutely DESPAIR for the lives of all children like Ame, I am reminded of a column I wrote years ago as part of my Carpe Diem weekly column series..


FOR THE CHILDREN (c)

A month old baby died this week, in small town USA. Police are treating the death as a homicide.

A two year old boy, battered and bruised, is apprehended by Children’s services in middle America on Friday and taken to a foster home, where he will no longer be exposed to his crack addicted parents.

A baby is in critical condition in a major Pediatric Intensive Care Nursery, the result of a shaken baby ‘incident.”

A teenage boy recovers physically from a suicide attempt as his family wrings their hands in shock. A 2 year old girl is still awaiting her fourth surgery as the result of an ‘accident’ in her home months ago. She is now safe in a foster home and the adult involved in the ‘accident’ awaits trial.

A friend phones me in the middle of the night in absolute panic. She has just seen, from her safe seat on the bus, a little boy being flung against an apartment building wall in a neighborhood in one of the most affluent cities on this continent.

Sound like extraordinary events to you? They should, but unfortunately they are all too common. I heard, first hand, about every one of these kids, and it made me sick. And all across this continent, adults ‘tsk tsk’ and ask “what’s wrong with the kids of today?”

Well I will tell you what’s wrong with the kids of today. Very simple. We, the adults, don’t give a damn. We see these abuses of our precious kids every day and, nine times out of ten, we look away. Say it is not our business to ‘interfere’. And if you think I exaggerate, look around your own neighborhoods, communities. I guarantee in the time it takes you to read this column, at least one, and probably more, child is being abused in ways unimaginable to most of us. And what do we do about it after we have turned away? Nothing. THAT is what is wrong with our kids today. Sure, we can read the mortality rates of kids in any third world country and smugly drink our lattes and call them “uncivilized”, but really, we have nothing to be proud of.

We are every bit as uncivilized as any other country in the world where kids are ‘lucky’ if they live beyond five years old. To me, it is a miracle of epic proportions that kids here DO live long enough to be adults. Go to any school. In any neighborhood, and you will see kids who have gone to school hungry or abused in other more insidious ways. And still the politicians and the other fat cat government agencies “study” the issues, and do nothing.

And we ask “what is wrong with the kids today?” In the “home of the brave”, there is so much wrong in the lives of our children, and we are too blind, uncaring, or stupid, to see. And we wonder why the juvenile courts are overflowing with kids resilient enough to survive childhood, and why the crime rate soars. We just don’t seem to get it that adults who survived abusive childhoods are predisposed to commit violent crimes. Duh. Monkey see, monkey do. Any child growing up as a witness to, victim of, abuse is bound to believe “might is right”.

This is a bleak snapshot of the lives of our children, but it is not all hopeless. Yes, I do despair just about every day as these stories are brought to me. But I also know, and cherish, the millions of stories out there of well-loved, nurtured children, who truly are blessed enough to be surrounded by adults who recognize what a privilege it is to be entrusted with the raising of our most precious blessings.

So what can we do as individuals? Number one, and a biggie, acknowledge, accept, that is our business, to interfere when we witness abuse. We each have a responsibility to every child we encounter…period. Just for the sake of a few seconds interfering we can change a life, maybe even save one. Number two? Be a visible presence in the neighborhood, let the children know who you are.

I swear there are whole neighborhoods in MY town where the kids all know who I am. Grins. Every family goes through challenging times, no matter who they are. And not every family is lucky enough to have an extended blood family close by, when familial squalls blow. At least let the kids know another safe, trusted adult, in their own neighborhood.

Number three? Get involved in volunteer work at your kids’ schools. Be a force to be reckoned with on the local community committees focusing on kid issues.

Number four? Harass your local and state politicians to put the money where it belongs – in resources for kids. Many a child, living a life of silent desperation, has been given hope, saved, because of the presence of something as simple as block parenting programs or after school programs. Even putting money into programs which teach/enable parents to understand their role is money well spent, for the kids’ sakes.

And, yes, I can hear you now: “But I don’t have time for all that . I shouldn't interfere”. Well – news flash – you better make time, you better interfere. When a single child is shaken, or has an ‘accident’ in their home, or dies as the result of an ‘incident’, or a despondent teenager even fails at attempts to end his own miserable life, not good enough to say “I don’t have time.”

And last but not least? Every single day hug your own children, (and any other child you can get your hands on!) Let these precious people know they are valued, special, adored. Many studies have shown that kids don’t need the latest designer jeans, or the most expensive toy on the block. Most successful adults became so by no accident. They became successful, contributing members of society because when they were children an adult took the time, and made the effort.

Sounds so simple, and it really is. We cannot afford to say, “I don’t have the time, ” or “I’m too tired, ” or '"not my business." Our whole future society depends on us making the time, interfering, and showing our kids that they DO matter.

So yes, today - again - I am overwhelmed with despair for our children, and I cry, even as I know that tears are most certainly not enough. Although I know this song below does not relate specifically to children like Ame, the message DOES specifically remind us that tears are not enough. Action - in the form of interfering if that's what it takes to ensure an escape from a life of hell, into a LIFE free of such torturous abuse. It is too late for Ame, but never too late for the thousands (millions) of other kids just waiting, hoping that someone will notice, interfere.

"As every day goes by, How can we close our eyes? We can make a difference. We can change the world forever. Tears are not enough.."


C'est l'amour qui nous rassemble
Posted by The Brat at 7:04 AM

Email ThisBlogThis!Share to TwitterShare to FacebookShare to Pinterest
Labels: Ame Deal, This One's for the Children

Hanging is too good for these lowlifes. The chair is too good. How about we roast them to death slowly.