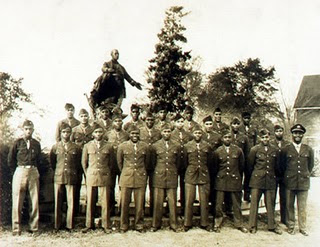 It’s never too late for your country to say that you’ve done a great job for us,” Ret. Col. Elmer D. Jones, 89, of Arlington, Va., said in an interview this week. Jones was a maintenance officer during the war.........

This year's theme, "70 Years of Aviation Excellence: Then, Now, the Future," celebrates the 70th anniversary of the Tuskegee Airmen legacy.

Sixty-seven original Tuskegee Airmen registered for the convention; among them was retired Col. Charles E. McGee.

"Because we were segregated, we were together over a long time, so some lifelong friendships have come out of that experience," McGee said. "Gathering at conventions is our way of keeping in touch, even though our numbers are dropping off. Conventions are a chance for us to share with others in the different communities."

The week kicked off Aug. 3 with the final flight of an Army 1944 PT-13 Stearman biplane, as it flew along the Potomac River. The aircraft originally was used to train Tuskegee pilots before retiring from military service as a crop duster.

Recognized as a vital piece of aviation and African-American history, the biplane -- named the "Spirit of Tuskegee" -- will be viewed by future generations at the Smithsonian Institution's National Museum of African-American History and Culture.

The Tuskegee Airmen also honored their brethren who lost their lives in service to their country with a wreath-laying ceremony at the Air Force Memorial, and they received a sneak peak of the national memorial to Martin Luther King Jr. that is set to open to the public later this month on the National Mall.

Aug. 4 was set aside to inspire the aviators of tomorrow...

Great column and a must read here.

I have written about the Tuskegee Airman a couple of times on Tanker Bros, and this group have a wonderful history of service to their country. Because I can't seem to figure out how to link to TB these days, I am going to reprint here(or attempt it) some of what I wrote back then. Take a look:

It’s never too late for your country to say that you’ve done a great job for us,” Ret. Col. Elmer D. Jones, 89, of Arlington, Va., said in an interview this week. Jones was a maintenance officer during the war.........

Ret. Lt. Col. Walter L. McCreary, who was shot from the sky during a mission in October 1944 and held prisoner for nine months in Germany, said it hurt that the group’s accomplishments had not been honored years earlier. “We took it in stride. It’s a recognition long overdue,” said McCreary, also 89, of Burke, Va.


I posted that one under the B*N*S*N banner, calling it "Tuskegee Airmen Honoured - FINALLY". Today? Part2. Yes, folks, more Good News! This past weekend two more Tuskegee Airmen - HEROES - have just been given the long overdue honour they earned.


In Huntingdon, W Virginia, Tuskegee Airmen Earl B. Rudisill and William Lee "Dubie" Hill, were recognised for their roles in this legendary group of heroes. Sad to say, this justice was so long overdue that "Dubie" did not live long enough to see it. His sister, Lillian, was there to accept this award on his behalf.

More than 10,000 blacks served during the American revolution.

During the Civil War, 171 black regiments were raised and 19 Medals of Honor were awarded.

Fourteen Medals of Honor were awarded to soldiers of the black regiments that fought in the Indian Wars.

The 10th Calvary regiment had actually captured San Jan Hill before Teddy Roosevelt's Rough Riders made their famous charge during the Spanish-American War.


Back in May, I shared with you some of the awesome sites I found in my research. Well, those statistics quoted above are on yet another "must read" site I just found today. The site is called Honor Thy Father: A Tuskegee Airman

On television today, March 29, 2007, I was watching President George W. Bush present the Congressional Gold Medal, the highest civilian honor, to the Tuskegee Airmen. My father, Joseph Philip Gomer, and mother Elizabeth Caperton Gomer were present in the audience. This day has been a long time coming. The Tuskegee Airmen have waited well over 60 years to receive the honor that they deserve....


I urge you to go read all that Ms Gomer-Douglass has to share about her own remarkable father. Take the time to learn more about what these heroes went through. Go here and marvel at the tenacity, courage and absolute integrity - then and now - of the Tuskegee Airmen here. 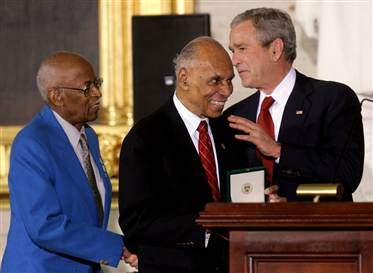 The Tuskegee Airmen helped win a war, and you helped change our nation for the better. Yours is the story of the human spirit, and it ends like all great stories do -- with wisdom and lessons and hope for tomorrow. And the medal that we confer today means that we're doing a small part to ensure that your story will be told and honored for generations to come. "
- President George W. Bush
March 29, 2007 [full transcript here]

As the Tuskegee Airmen site says:

The outstanding record of black airmen in World War II was accomplished by men whose names will forever live in hallowed memory. Each one accepted the challenge, proudly displayed his skill and determination while suppressing internal rage from humiliation and indignation caused by frequent experiences of racism and bigotry, at home and overseas. These airmen fought two wars - one against a military force overseas and the other against racism at home and abroad.

Email ThisBlogThis!Share to TwitterShare to FacebookShare to Pinterest
Labels: Tuskegee Airmen 70 years on