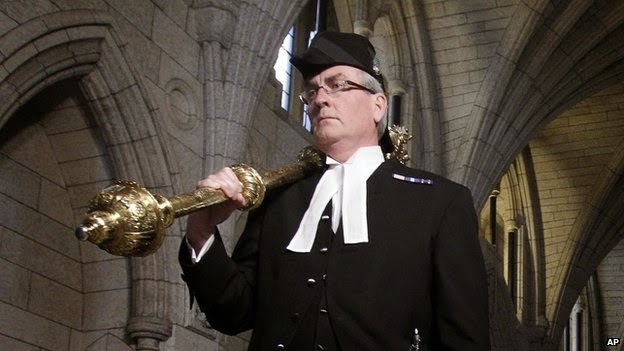 Parliament's Sgt-at-Arms gained world wide attention when he was part of the security team that took down the Terrorist who had just killed Cpl Cirillo on October 22, 2014.

Now the CBC is reporting that Mr Vickers has a new job:

Kevin Vickers, the House of Commons sergeant-at-arms who became a household name in October after his confrontation with a gunman in a hallway on Parliament Hill, will be Canada's next ambassador to Ireland.

The appointment is effective Jan. 19. Vickers, 58, replaces Loyola Hearn, a former Conservative cabinet minister who held the post from 2011 until last August. ​

"I've known Kevin for a very long time," Prime Minister Stephen Harper said at an event in Delta, B.C., on Thursday, touting his vast security and management experience and "tremendous acts of heroism."

"I think they speak for themselves and speak to his character, and I know he will do a tremendous job as ambassador," Harper said. "I know he's looking forward to that assignment."

"As a Canadian with family on both sides hailing from Ireland, there could be no greater honour. I am humbled by the invitation to serve my country in this way," said Vickers in a statement, adding that he was saddened to be leaving Parliament Hill, but will cherish his time there.

"I would also like to take this opportunity to thank all Canadians for their support in the last few months. You have my word that I will do my best to represent you in Ireland with pride and dignity," he said....

I have absolutely NO doubt about that at all.....

Read the rest here.  (There's a video there, too)