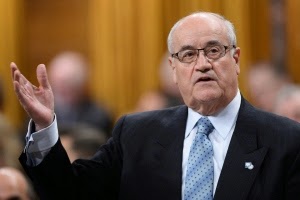 Ever since Julian Fantino was named Canada's Veterans Affairs Minister, he has continued to disrespect, ignore and under-serve Veterans.  Over the last few months, as he has repeatedly demonstrated his disdain for Veterans and their families, opposition and calls for his resignation have been long and loud, both from politicians and from within the Veteran community.

Today, Fantino was removed from that portfolio in a move that is long overdue.

In a release Monday, the government said Fantino will remain in cabinet as associate minister for defence — the same post he held before being named international co-operation minister in 2012.
This time, Fantino will focus on Arctic sovereignty, information technology security and foreign intelligence, the release said.

The change was made during a quiet ceremony at Rideau Hall around midday and addresses for now what has been a nagging controversy for Prime Minister Stephen Harper....

Fantino faced repeated opposition calls for his resignation or firing in the fall over his handling of the Veterans Affairs Canada portfolio. The department has faced much criticism from some veterans because of the decision to close regional offices and for a lack of support for veterans with mental illness.


In November, the auditor general found the department was not doing enough to provide mental-health services to veterans, just days after it was revealed the government had returned nearly $1 billion in lapsed funding to the treasury in recent years....


Be sure to check out the 'related links' there for some of Fantino's most egregious failings as Veterans Affairs Minister.

With his departure from this important portfolio, maybe now Canada's Veterans will be given the respect and all benefits that they have EARNED.