I learned of a tragedy today from WW2 that I had never heard of before.  Read on:


In the early hours of 28 April 1944, a convoy of eight American landing ship tanks (LSTs) were carrying out a D-Day dress rehearsal off the South Devon coast when they were ambushed by German E-boats.

Two of the LSTs were sunk in the attack off Slapton Sands, killing 749 US servicemen - a higher death toll than at the initial D-Day landings which were to take place on Utah Beach, Normandy, two months later.

In fact, the operation - called Exercise Tiger - proved to be the most costly Allied training incident, in terms of lives lost, in the whole of World War Two.

Today, off that same coast, a memorial service was held:

A service has been held to remember hundreds of US servicemen who died off the coast of Devon during a World War II training exercise.

The event marks the anniversary of Exercise Tiger at Slapton Sands on 28 April 1944.
A total of 749 servicemen died when convoys training for the D-Day landings were attacked by German torpedo boats.

Two of the surviving veterans, now in their eighties, flew over from the United States to attend.... 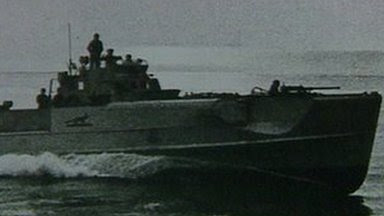 
More on this day's events, which is a MUST READ, here.


In 2009, BBC Devon compiled a feature article on this little-known event in WW2;  little-known because it was kept secret until many decades later.

A few first-person accounts are included in the feature article:

Paul Gerolstein was on board LST 515 and is one of three Exercise Tiger veterans who travelled to Torcross to attend the annual memorial service and ceremony on Sunday 26 April 2009. 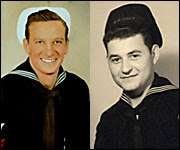 "I remember it as if it were yesterday," said Paul, who was gunners mate in the US Navy. "Our captain, John Doyle, decided to stay on station and pick up survivors. 'We came here to fight the Germans and we will stay here and fight,' he ordered
.
"I don't remember the exact number of troops our ship picked out of the water, but I believe it was around 170.

"The medical personnel were ordered, under threat of Court Martial, not to ask anybody about what happened. It was imperative that the Germans did not know what we were doing."

Paul went on to take part in the D-Day landing at Utah Beach.

He was joined by two other veterans, Frank Derby (LST 496) and Nathan Resnick (LST 511), and relatives of men lost in the tragedy....

As always, the voices of our Heroes deserve to be heard, remembered and honoured.  GO now, and read more voices, watch the video,  learn the history of a tragedy that proved to be the most costly Allied training incident, in terms of lives lost, in the whole of World War Two.