Terrorism: Fear and Anger in Boston

Terrorism has once again exploded on the streets of America, and the usual suspects of 'expert consultants' have been rushing in front of media cameras to pontificate - noisily and ignorantly - about the who/what/why; this even as the Massachusetts National Guard, and First Responders,  do what they do so well: provide care to the injured, the terrorised.

The POTUS may have been reluctant to call what happened an 'act of terrorism,'  but those who have already seen the evil face of terrorism up close and personal showed no such reticence calling the cowardly attack what it is:  TERRORISM.


In amongst the overwhelming noise of 24/7 msm absurd feeding of the fear and anger felt by America - participants and non-participants alike -  some dispassionate, logical voices could be heard dissecting the reality of what happened.

As usual, War On Terror News shares insights that the ignoramuses in the msm could never hope to understand: 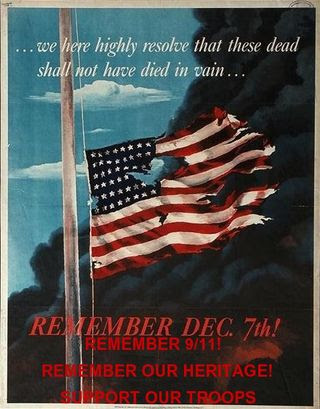 Three were killed and more than 100 were injured.  Two explosive devices (at least) were used.  The target was not the military, or even government officials that could be characterized as having a legitimate role in military affairs.  That makes it terrorism.  Terrorism has a goal of inflicting terror in an otherwise unafflicted population.  It does so by making a population feel as if the terrorists can strike at will against whomever they desire.  It does so by making security and government officials appear incapable of protecting the populace from the terrorists.  It has a goal of convincing the population to force the government to bow to its desires.  It does so, for a profit.

It does not matter if the terrorists are white, arab, asian, black, or hispanic.  An act of terrorism is terrorism, period.  Terrorism is not just a prank, like setting a trashcan on fire, and not just a crime conducted by organized crime.

While there is no substantial proof in public that this was an act of international terrorism, there is less evidence that it was a case of domestic terrorism.  While the media pontificated yesterday that it could have been an innocent natural gas explosion, and when they finally abandoned that theory turned to suggesting it was domestic, their reasoning for both suggestions was flawed....

Truth is, no matter what or who is deemed ultimately responsible, the result is the same: innocent citizens brutally injured, innocent children killed, and of course, people very afraid and angry.  Anger and fear are natural human responses to such inhumane, cowardly acts of terrorism, and WOTN provides strategies that we can all use to mitigate the feelings of helplessness, fear and anger when confronted with such loathsome events.:


But the question of the common man is "What can or should I do?!?!"  The answer is to reach down inside, and find your resolve, your resolve to not be afraid.  There were more people killed and injured on the streets of Massachusetts by traffic accidents, than by explosives, last week.  Of 310 Million Americans, this act of terrorism only killed 3 people.  We don't fear cars, nor phones on which text messaging has become the number one factor in accident fatalities.

And you should come to grips with the fact that following an explosive event, your pure intentions to help, could mean that you're just a person in the way.  You should come to grips with the fact that an explosion occurs in a split second.  You need not fear it.  An explosion will kill some, injure others, and leave others unscathed.  It is over in an instant.  There is little anyone can do about it, and most victims of it have no idea it is coming.  You can keep your eye out for suspicious behavior, for suspicious packages, and avoid them, or report them.

You must come to grips with the fact that evil does exist in the world, that there are a minority of psychotic people who will kill, maim, injure, or steal from you, for nothing more than their own personal entertainment, but possibly by justifying their actions as "part of the greater good," or even to "teach you a lesson."  What stands between you and evil, are the Sheepdogs, Military and Law Enforcement, but when the Wolf knocks on your door, it is YOU that is your first defense, no matter how willing the Sheepdog is to deal death to the Wolf that would do you harm.

"Situational Awareness" or being observant and alert to the world around you, to the possibility of evil knocking on your door, is your most potent defense.  Paranoia is your enemy, as is anger and blissful ignorance, but recognizing when someone is behaving abnormally can save your life.  If the hair on the back of your neck stands up, don't ignore it.  Explore why your subconscious is warning you.

Having a plan, preconceived, of what you would do, if you were confronted with any variety of bad situations will help you, if you face any of them.  The fewer responses you can identify for the greatest number of incidents is the best.  People "freeze" because their mind is overwhelmed, and cannot decide between responses.  Decide, and consider, ahead of time, for as many events as you can imagine.

But don't stick your head back in the sand, and don't allow fear to stop you from doing the things you must do.  Live your life, but be aware of your surroundings.  Support Our Troops, and their mission to keep you safe, but be ready if the enemy slips in, to your door.  The Israelis have done it for decades.  Our Troops volunteered to fight the enemy in their backyard, so you could be safe in yours...


War On Terror News has much more, and it is ALL a MUST READ here.   Laughing Wolf also has a very informative column up: Some Thoughts On Boston and Preparedness

Laughing Wolf's piece is a must read, practical response to the ongoing threats of terrorism.

Make no mistake, terrorism will remain a constant within our society, no matter what any politician would like you to believe.  I remember when President GW Bush was ridiculed in the aftermath of 9/11 he told Americans to "go shopping, "  In reality, that was a perfect response to the more than justified fear and anger.  If any of us give in to the fear that can paralyse us, prevent us from living our lives, then the terrorists have won and I, for one, refuse to give them that power.

Both WOTN and LW warn against complacency, which is absolutely crucial.  Not one of us can afford to stick our heads in the sand, and hope that if we ignore it, this global terrorism will not affect us.  If nothing else, this last weekend in Boston has been a graphic reminder that such days of innocence are long gone.

Am I advocating we remain perpetually fearful, afraid to go about our daily business?  Of course not, but I am adamantly advocating that we ALL need to be aware at all times of our surroundings.

Now, more than ever, we must not allow any terrorist coward to dictate how we will live.

We must PAY ATTENTION.