Canada's Election Day (again!): 155 reasons why I WILL vote 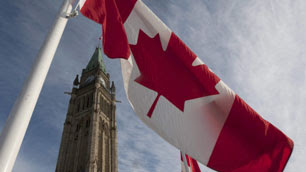 May 2 is Election Day in Canada; a federal election, which in theory means that Canadians right across the land will be voting for a new federal government. 'In theory,' because the records show that not all Canadians eligible to vote, do so, and the voter turnout has been steadily declining over the years. This is the third election in 5 years, and each time we have managed to elect a minority government. A minority federal government has meant that on any bills, motions, brought forward in the Canadian Parliament, all parties had to 'play well together' or something like that, for anything to get accomplished.

This most recent election writ was dropped because the government of the day - the self-branded "Harper Government" - was found to be in Contempt of Parliament. Despite the fact that this was historically a first in any Commonwealth country, none of the parties on the campaign trail have talked about that much. What should have been the major issue, loud and clear, has not been front and centre.

This election campaign has been interesting. Harper is running scare tactics as he desperately seeks a majority government this time. He is all about control, and with a majority government, he wouldn't have to play nice with anyone. He has controlled every campaign stop, to the point of only allowing so many questions to be asked, (extension of his controlling the media in Ottawa), and at one stop infamously having students removed because they apparently were on FaceBook supporting another party. Oh the shock! When Harper came into power with his first minority government, the preceding Liberal government had left him with a surplus in the country's piggy bank. Now? Billions as a deficit. Oh, and Mr Harper's education background? Economics!

Jack Layton is telling his campaign supporters that he is "Ready to be your Prime Minister!". Oh, really? No New Democrat Party has ever formed a federal government in Canada, even though some of the provinces have had NDP governments. The list of promises that Mr Layton is rolling out are giving me a touch of the deja vu. Same old story, with money Canada really doesn't have.

As a journalist, he witnessed the aftermath of genocide in Rwanda, the chaos of the former Yugoslavia, and the shadow of tyranny in Iran. As Canada’s representative on the International Commission on Intervention and State Sovereignty, Michael pioneered the doctrine of the Responsibility to Protect, which has since been adopted by the United Nations. He is the author of 17 books and the recipient of 11 honourary degrees,..(source)

All well and good, of course, but does that make him any more fit than Harper or Layton to run this country? In this election campaign, by the sounds of it, his campaign stops have become like revivalist meetings, as he exhorts his audiences to "Rise up! Rise UP!"

Elizabeth May, national leader of the Green Party, is trying for a first time electoral success, as she promises to make Canada green from coast to coast to coast.

Which leaves us with Gilles Duceppe, leader of the Bloc Quebecois party in the province of Quebec. In a weird twist that I do not understand, Duceppe, whose stated political goal is Quebec separation from Canada, has, in these last minority governments, held power over the rest of Canada within the Canadian Parliament, because of the minority. His party is only running candidates within Quebec and yet they get all the perks and positions that the other truly national parties are afforded..According to an article in the last few hours, ( here) Duceppe is in the political fight of his life, since his party is losing ground rapidly to the national NDP, under the leadership of the aforementioned Mr Layton.

Strange goings on in Canada, I tell you, and really not much to choose among any of them. BUT I WILL be voting, for the 155 reasons I reference in the headline.

If you are a Canadian reader, I hope you know to what that number refers to. For the rest of you: That 155 represents the Canadian men and women who have given their lives in this Global War on Terror in Afghanistan. Men and women of our fine Military, who when their country called on them, they stepped up to serve without hesitation. Even before this election, I have been really more irate than I can tell you, that our politicians have seemingly just seen our brave troops as props or talking points for them to make political brownie points. In this election campaign? Not much mention at all. And that infuriates me. Here we are in a war, for crying out loud, and our troops are not on the front burner as a legitimate election issue. I do hear from a reputable source, however, that unlike our neighbours to the south, Canadian troops DO get to vote even while deployed, and their votes are counted!

One hundred and fifty five Canadian heroes gave their all, fought and died to protect MY right to live in freedom, to vote in this democracy we call Canada, and for that reason alone I WILL vote.


And then there is Sapper Steven Marshall:

Killed in action was Sapper Steven Marshall, serving as a member of the Task Force 3-09 Battle Group from the 1 Combat Engineer Regiment, based in Edmonton, Alberta.

Sapper Steven Marshall died on October 30, 2009, and his father gave an interview last week urging Canadians to get out and vote.

From the Calgary Sun:

Casting his vote at an advanced polling station on Monday will be Marshall’s own way of honouring his son and the principles for which he and countless other Canadians have fought over the last century.

He hopes others do the same.

“I don’t want my son to be remembered as number 133,” he told the Sun from his Calgary home.

“They were all very special individuals. They fought, and Canadians have fought and died for 100 years, for the right to vote and the freedoms that we have.

“One of the things I think is important is we have to get out there and exercise it.”...

Go read the rest of the interview here. This father knows the price of freedom all too well.

These are but a few of the 155 reasons I will go out to vote. Even though I think none of the current crop of politicians is worthy to lick the boots of any of our Canadian Heroes, I owe our Fallen Heroes this, at the very least.
Posted by The Brat at 2:22 AM