"What have we learned?" From Israel National News:

On the eve of Holocaust Remembrance Day, Arutz Sheva spoke to Rabbi Yisrael Meir Lau, the rabbi of Tel Aviv and former Chief Rabbi of Israel who is also a Holocaust survivor, author of a book about his Holocaust experiences, and the chairman of the Yad Vashem Holocaust Memorial project.

One example, he said, is the fact that “the [Jewish] Exile is as strong as ever. We still have not had the wisdom to unite in a national homeland.”

Another lesson that has not been learned is the fact that genocide remains a threat, he said. “The phrase, 'It can't happen to me' was made bankrupt by the Holocaust. All the strong political organizations of German Jewry, all the Rothschilds and Einsteins, all could collapse together in the gas chambers. This lesson, that it can happen at any time, anywhere, we have not yet learned.”...

Yes, there is more from the Rabbi, and yes, it IS compelling, and it IS a must read here.

A while back, one of our current Danish coalition partners shared an amazing story of the Danish response to the plight of the Danish Jews. The story he told IS recorded in the history books, and is a wonderful example of what can be accomplished when people stand up to tyranny. From an Auschwitz site: 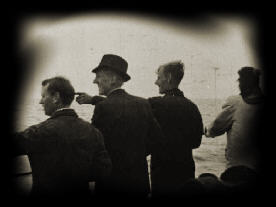 
It's one of the great untold stories of World War II: In 1943, in German-occupied Denmark, the Danish people find out that all 7,500 Danish Jews are about to be rounded up and deported to German concentration camps. Danish citizens spontaneously make their own decision: it's not going to happen. And it didn't. Risking their own lives, the Danes quickly rallied round to save their fellow citizens, and almost all of the country's Jews were able to escape the clutches of the Nazis and find refuge in neutral Sweden. In 1941, in the midst of World War II, the Germans began their "Final Solution" for the Jews. At that time there were 10 million Jews in the countries of German-occupied Europe. By 1945, less than half of that number were left alive. The Nazi goal was to exterminate the Jews and rule Europe in an ethnically "pure" German Empire.

At the infamous Wannsee Conference near Berlin 20 January 1942, details of the mass murder plans were discussed. Documents from that conference are still in existence today. They list, country by country, the number of Jews in Europe. Against the entry for Denmark is the figure 5,600-the inaccurate Nazi estimate of the number of Jews in Denmark. 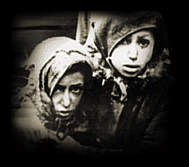 Final Solution: Denmark was a small idyllic country of 4 million people, with a history of taking in immigrants from countries such as Germany, Holland, Sweden, and Poland. Before the war, Denmark's small Jewish population was well integrated into the community.

On April 9, 1940, Germany attacked Denmark. From then until 1945, Denmark was under German occupation. Most Danes were pro-British and anti-Nazi, but they were also aware of the need to adjust to living in a German-dominated Europe. Danes and Germans quickly worked out the terms of occupation. King Christian X remained in Denmark, unlike his fellow monarchs in Norway and the Netherlands who fled to escape the Germans and establish resistance movements in England. The Danish government continued to rule. The Danes agreed to supply rich agricultural produce and other goods to the Germans.

By the following year, however, a Danish resistance movement had begun, but it made little headway until 1943. Then the mood in Denmark began to change. German military targets and businesses working for the occupiers were hit by a wave of sabotage actions. There was also labor unrest, with massive strikes - widely supported by the populace - in many Danish cities. 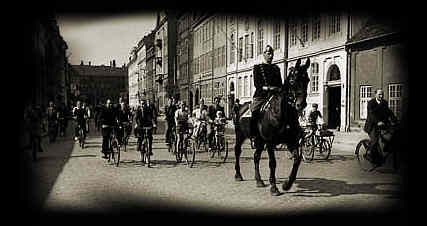 The King on his horse, followed by Danish citizens on bicycles

of Denmark and non-Jewish Danes thwarted the order by donning the armbands themselves.


A popular version of the legend has King Christian sporting an armband as he makes his daily morning horseback ride through the streets of Copenhagen, explaining to citizens that he wears the Star of David as a demonstration of the principal that all Danes are equal. And non-Jewish Danes respond to their king's example by wearing the armband as well, thus preventing the Germans from identifying Jewish citizens and rendering the order ineffective.

Although the Danes did undertake heroic efforts to shelter their Jews and help them escape from the Nazis, there is no real-life example of the actions described by this legend. Danish citizens never wore the yellow badge, nor did King Christian ever threaten to don it himself. In fact, Danish Jews never wore the yellow badge either, nor did German officials ever issue an order requiring Danish Jews to display it.

But the Danes engaged in symbolic gestures of defiance against their occupiers, such as wearing four coins tied together with red and white ribbons in their buttonholes. Red and white are the Danish colors, and four coins totalling nine ore represented the date of the occupation, April 9....

There is much more of this incredible story, and yes, another MUST read here.

In the US there is a Holocaust Memorial Museum, and I urge you to go spend some time there, reading the various sections here. 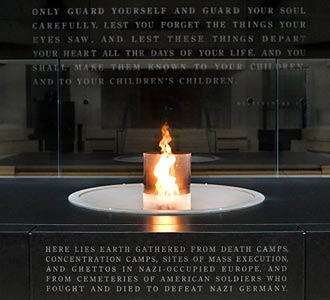 Holocaust survivors, who are first-person testimony to the Nazi death machine, are disappearing. On the eve of Holocaust Memorial and Remembrance Day, statistics show that their death rate in Israel is 35 a day – 13,000 a year.

The Welfare of Holocaust Survivors Foundation reported that 208,000 Holocaust survivors remain in Israel, a decline of 26,000 from 2009. The decline of the number of living survivors coincides with increasing anti-Semitic campaigns that deny, belittle and even mock the Holocaust. The Palestinian Authority teaches the Holocaust denial doctoral dissertation of PA Chairman Mahmoud Abbas throughout its educational curriculum.

Only three percent of Holocaust survivors in Israel are under the age of 70, while half of them are over the age of 80. Projected figures indicate that only 145,000 survivors will still be alive in 2015....

Nation to bow its head on Holocaust Remembrance Day

Tonight’s opening ceremony at Yad Vashem focusing on ‘Faces Behind the Documents, Artifacts and Photographs.’

The 6 million Jews murdered by the Nazis during the Holocaust will be honored at ceremonies held across the country on Sunday evening, the start of Holocaust and Heroism Remembrance Day.

This year, the central theme of the ceremony will be Fragments of Memory: The Faces Behind the Documents, Artifacts and Photographs, a campaign launched by the Holocaust museum aimed at collecting and preserving documents so that future generations may learn about the genocide of the Jewish people by the Nazis from first-hand sources.

During the ceremony, six Holocaust survivors will light torches in memory of those who suffered under Nazi persecution before and during World War II...

Monkey In the Middle also has a column up: 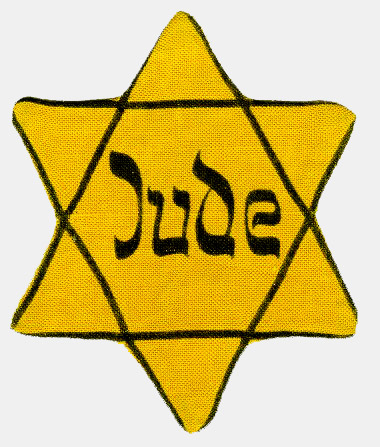 Today is the day we remember and mourn those who were murdered by the Nazis and their allies...

Go here to read, and watch the videos.