ANZAC Day 2014: Remember and Honour Them 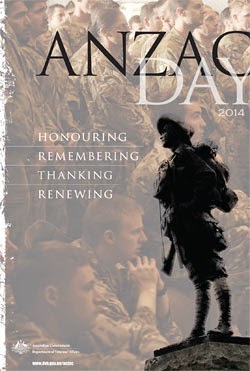 The poster features two images.  One is the memorial of the Bullecourt Digger which stands in the Australian Memorial Park in France, commemorating the 10,000 soldiers of the Australian Imperial Force who were killed or wounded on the nearby Hindenburg Line of the Western Front in April and May 1917. The background image depicts members of the ADF taking part in an Anzac Day commemoration at Tarin Kot, Afghanistan.

Alongside the images are four words recognising the importance of commemoration:


The Australian Government - Department of Veterans Affairs - has a site that has lots of information about, and for,  our Aussie Veterans.  Check it out. 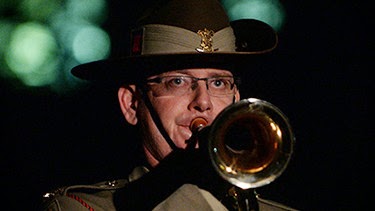 Tens of thousands of Australians have attended services around the country to commemorate Anzac Day and pay tribute to the men and women who have fought and died in war.

While crowds build in Turkey ahead of the traditional Gallipoli memorial later today, local services have been well attended across Australia, and marches are now taking place.

Canberra
In Canberra, the Duke and Duchess of Cambridge made a late decision to attend the national dawn service outside the Australian War Memorial in Canberra.

As always, the service attracted a large crowd, likely to exceed 20,000.

Presenting the address, Victoria Cross recipient Corporal Ben Roberts-Smith said Australia was emerging from its longest war which claimed the lives of 40 soldiers.

He said these were men like their forefathers believed that our safety, freedom and way of life were more important than their own suffering and loss.

".... proud willing and capable men who did what needed to be done," he said. [emphasis mine] 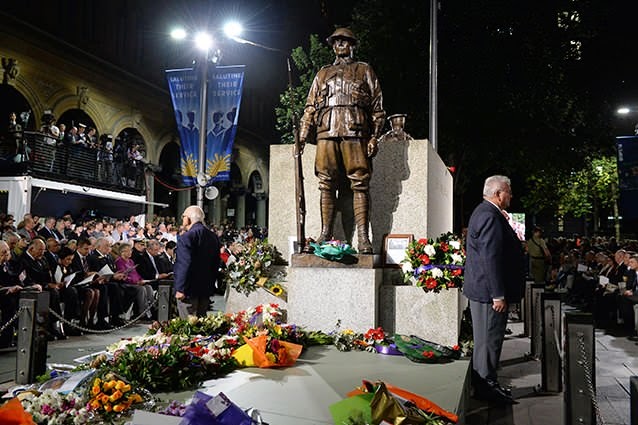 The cenotaph is seen during the Anzac Day dawn service in Sydney. Credit: AAP

There are many events scheduled across the country and you can find information here.

There is a special event being held in America, honouring Captain Paul McKay. Capt McKay was an Aussie on holiday in New York,  who went missing,.  His body was found two weeks later. 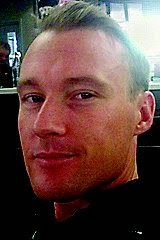 The remembrance holiday, referencing the Australian and New Zealand Army Corps (ANZAC), is meant to honor war heroes who died serving those countries, much like Memorial Day does in the United States.

But the tribute in Saranac Lake will celebrate a soldier born thousands of miles away who ended his life here near the summit of Scarface Mountain.

“One of Paul McKay’s friends asked if I would lay a single poppy in a place of honor for Capt. McKay on ANZAC Day. I decided I would do that on Scarface. So, about six or seven of us are ascending Scarface on April 25 in a private tribute.

“I thought that it would be appropriate to have our village also acknowledge ANZAC Day and post-traumatic stress. We don’t call it a disorder,” the mayor said....


Many more details of the planned memorial events here. 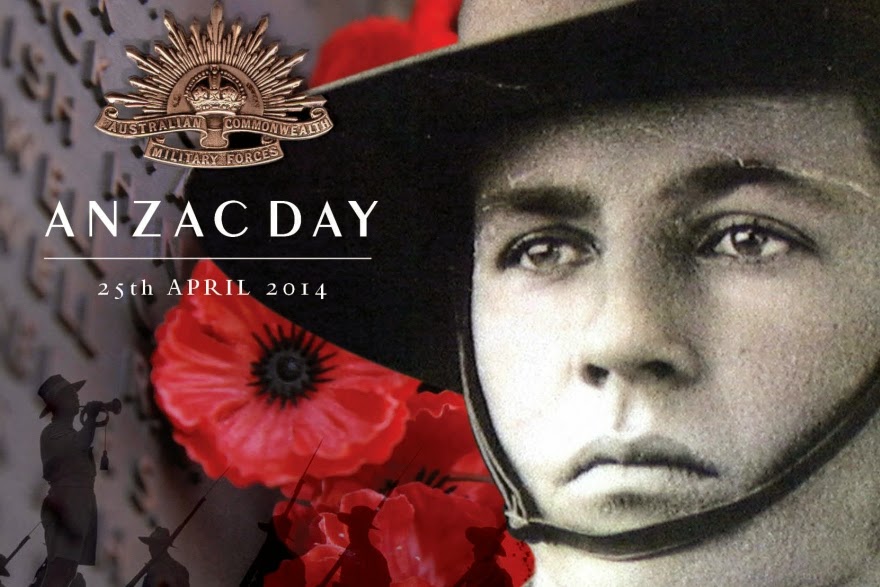 Ninety-nine years ago, thousands of brave young men went ashore on a foreign beach in a far distant land. In a display of courage, determination and mateship, these Australians and New Zealanders created a legend which, when retold today, evokes pride and passion in a new generation of Australians.

The Anzac spirit of courage under fire, selflessness and unwavering loyalty, tenacity and mateship was forged in the battles at Gallipoli. The legend of our Anzacs has transcended time to become a symbol of what we value as Australians.

On Anzac Day, we stop to remember and reflect on the sacrifice of men and women who serve and served our nation in times of war and peace. Veterans  of the past proudly display their medals, soldiers of today boldly wear their uniforms. Families of veterans who have since died honour their memory by wearing medals awarded when the battle was over.

In recent years, there has been a resurgence of participation on Anzac Day. Many more people, young and old, are rising early to attend Dawn Services and honour our Anzac tradition.

Today we see the faces of living heroes; not just veterans of war, but those who proudly wore our uniform and served in times of peace. We honour them and the families who supported them. We remember their service for our nation.

A Tribute to  Australian Troops 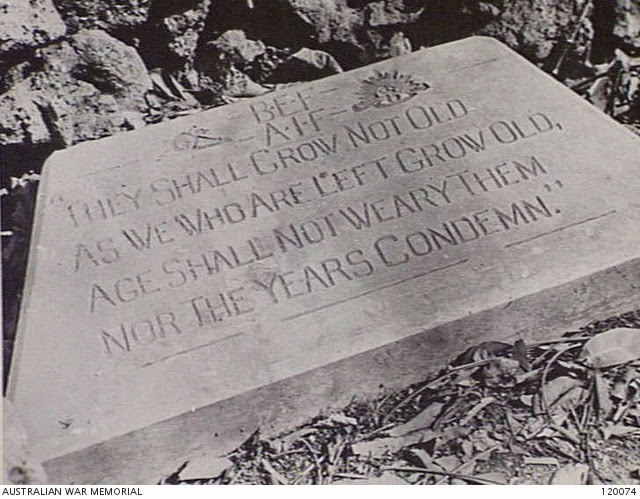 Memorial tablet in cemetery near Kupang, West Timor, where a number of Australian Second World War soldiers are buried.


In most ceremonies of remembrance there is a reading of an appropriate poem.

One traditional recitation on Anzac Day is the Ode, the fourth stanza of the poem For the fallen by Laurence Binyon (1869–1943). Binyon was the assistant keeper of prints and drawings at the British Museum, and the author of several volumes of verse. For the fallen was first published in the London Times in 1914 and later in many anthologies of war verse. It was selected in 1919 to accompany the unveiling of the London Cenotaph and, like so many memorial traditions, passed into common use across the Commonwealth. Its use on Anzac Day might have originated with the Queensland Anzac Day Commemoration Committee, which printed the poem on the cover of a collection of sermons and addresses for Anzac Day, published in 1921. Binyon’s poem was also read at the laying of the Inauguration Stone at the Memorial in 1929.

The most well-known lines are:


They shall grow not old, as we that are left grow old;
Age shall not weary them, nor the years condemn.
At the going down of the sun and in the morning
We will remember them.
(source)