Lots of headlines about the Boston Marathon today - one year after the terrorist attack that killed three and injured hundreds. 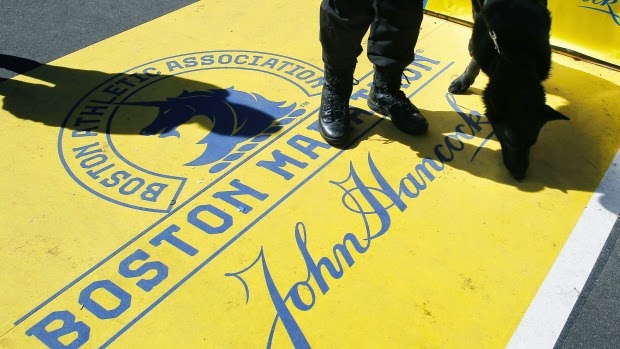 About 36,000 runners are registered to run this year's Boston Marathon - one year after two bombs killed 3 people and wounded more than 260 others at the annual race. (Brian Snyder/Reuters)

For years, state and local officials have conducted a "tabletop exercise" before the Boston Marathon, a meeting that allows them to study a map of the 26.2-mile course from Hopkinton to Boston's Copley Square and plan for emergencies that could arise during the race.

So many new people needed to attend the session this year that they moved it from the state's emergency bunker in Framingham to the a convention centre in the city. The crowd grew from what usually is about 100 to more than 450, according to Boston Athletic Association executive director Tom Grilk, who is in charge of organizing the race....


In the lead up to today's Run, a report was issued last week about lessons learned from that atrocity.

Last Thursday, DHS released a 19-page report titled “Boston One Year Later: DHS’s Lessons Learned,” detailing three topics which were a focus of attention in the aftermath of the Boston Marathon bombing. The report discussed the “importance of partnerships,” the “need for effective and reliable communications,” and the need to further boost anti-radicalization efforts.

ABC News reports that immediately after the bombing, U.S. Customs and Border Protection’s (CBP) National Targeting Center “re-vetted” all flights that departed earlier in the day from Boston, New York, and Newark airports to identify potential suspects. A review of DHS’s “name-matching capabilities” found a misspelling of “Tamerlan Tsarnaev,” the older of the accused Boston bombers, allowing him to return unnoticed to the United States after a trip to Russia despite previous alerts from Russian intelligence. DHS has now improved its ability to detect variations of names derived from a wide range of languages.

Boston police chief Ed Davis said he was not notified about Tsarnaev before the attacks despite previous FBI investigations of Tsarnaev, but now DHS has improved its system of sharing information with local officials about potential threats.

Since 2002, Massachusetts has received roughly $1 billion from twenty-two DHS grant programs, including $370 million for the Boston urban area....