These days, as evil stomps and murders on every continent on the planet, it is easy to be overwhelmed and forget there will ALWAYS  be good and decent people among us.

Found this story on IDF Blog: 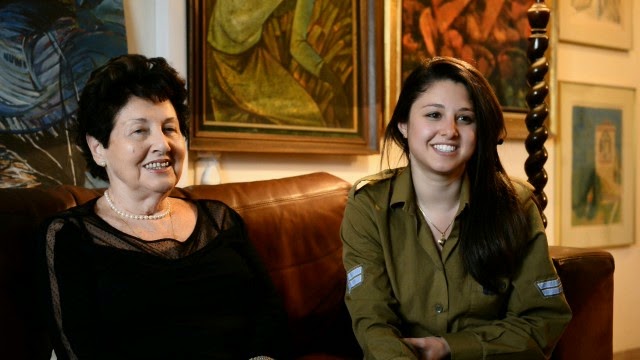 Eva and her granddaughter

Before moving to Israel and establishing a family, Eva Levi, 75, lived a very different reality. She is the youngest person alive who lived through the horror of the Holocaust thanks to the famous Oscar Schindler. Today, a few days before Holocaust Memorial day, she tells her story.

Hello, my name is Eva Lavi. I was born in Krakow, Poland and when I was two-years-old, WWII broke out. When the war was over, I was 8 years-old. During the war I was deported from a ghetto to Auschwitz and then to Czechoslovakia. I am alive today and can tell you my story thanks to two people: Oscar Schindler and my mother. Today I am married and live in Israel. I have two children and three grandchildren. (She laughs) They are a bit lazy! My first granddaughter, Anne, is currently in the Israeli army. Because of this, I am telling my story to the IDF.

A Lost Childhood
When the war started, I was such a little girl that I didn’t understand what was happening. I didn’t have a childhood at all; I didn’t have grandfathers or grandmothers, nor did I go to kindergarten or school.

However, though this was a terrible time in my life, I had two great fortuitous things: I was lucky to have my name inscribed on Oscar Schindler’s list, of which I was the youngest person, and I was able to stay by my mother’s side.

We were first sent to the Krakow Ghetto. From this ghetto, they took us to labor camps near Krakow and this is how I got put on Schindler’s List. They then wanted to take us to Czechoslovakia but after an accident, we were transferred to Auschwitz. We stayed in the death camp for three weeks, and lived in horrendous conditions. The fear of dying was always present and renewed every time we went near the crematoria.

A story of uncertainty and insanity
A particular moment stands out specifically during my time living in this hell. One day, while all the women were together in a dark building, a female Nazi officer approached my mother and told her that I was to be taken away. My mother began to cry and scream. She wouldn’t let me go. But in Auschwitz it was impossible to refuse. My mother asked her where I was being taken and the officer promised I would be going to a good place. My mother did not understand. A good place? At Auschwitz? How could that be possible? But the officer again swore to my mother that I would be taken to a good place. And indeed, they took me to a very different place inside Auschwitz....

This is a MUST READ reminder here  of man's inhumanity to man.  A timely reminder of what happens when we ignore the indisputable signs of evil all around us.