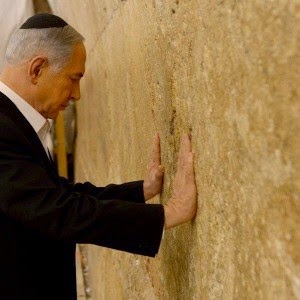 Netanyahu at Western Wall: I'm honored by election win, will do everything to protect Israel


Prime Minister Benjamin Netanyahu went to the Western Wall Wednesday in his first post-election night public appearance after sweeping to victory and said he was moved by the responsibility placed on his shoulders.
“Here, in this place, I am awed by the historical significance of a people renewing itself in its homeland after 4,000 years,” he said, after praying at the Wall and placing a note inside its crevices. “I am moved by the weight of responsibility that the people of Israel have placed on my shoulders, and appreciate the decision of Israeli citizens to chose me and my colleagues against all odds.”...


Related MUST READ from one of my favourite Israeli writers:  Israel's message to Obama