Syria: What about the children? 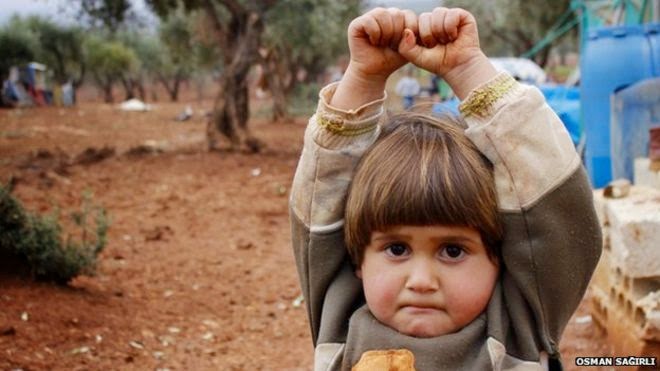 This is 4 year old Hudea who lives in the Atmeh refugee camp in Syria.  Her picture has gone viral on social media the last few days. The photo was taken by Turkish photographer Osman Sağırlı in 2014.


The photographer who broke the internet's heart

31 March 2015
Thousands online have shared an image of a Syrian child with her hands raised in surrender - but what is the story behind it?


Those sharing it were moved by the fear in the child's eyes, as she seems to staring into the barrel of a gun. It wasn't a gun, of course, but a camera, and the moment was captured for all to see. But who took the picture and what is the story behind it? BBC Trending have tracked down the original photographer - Osman Sağırlı - and asked him how the image came to be.


It began to go viral Tuesday last week, when it was tweeted by Nadia Abu Shaban, a photojournalist based in Gaza. The image quickly spread across the social network. "I'm actually weeping", "unbelievably sad", and "humanity failed", the comments read. The original post has been retweeted more than 11,000 times. On Friday the image was shared on Reddit, prompting another outpouring of emotion. It's received more than 5,000 upvotes, and 1,600 comments.


Accusations that the photo was fake, or staged, soon followed on both networks. Many on Twitter asked who had taken the photo, and why it had been posted without credit. Abu Shaban confirmed she had not taken the photo herself, but could not explain who had. On Imgur, an image sharing website, one user traced the photograph back to a newspaper clipping, claiming it was real, but taken "around 2012", and that the child was actually a boy. The post also named a Turkish photojournalist, Osman Sağırlı, as the man who took the picture.


BBC Trending spoke to Sağırlı - now working in Tanzania - to confirm the origins of the picture. The child is in fact not a boy, but a four-year-old girl, Hudea. The image was taken at the Atmeh refugee camp in Syria, in December last year. She travelled to the camp - around 10 km from the Turkish border - with her mother and two siblings. It is some 150 km from their home in Hama.


"I was using a telephoto lens, and she thought it was a weapon," says Sağırlı. "İ realised she was terrified after I took it, and looked at the picture, because she bit her lips and raised her hands. Normally kids run away, hide their faces or smile when they see a camera." He says he finds pictures of children in the camps particularly revealing. "You know there are displaced people in the camps. It makes more sense to see what they have suffered not through adults, but through children. It is the children who reflect the feelings with their innocence." [emphasis mine]


The image was first published in the Türkiye newspaper in January, where Sağırlı has worked for 25 years, covering war and natural disasters outside the country. It was widely shared by Turkish speaking social media users at the time. But it took a few months before it went viral in the English-speaking world, finding an audience in the West over the last week.

As Canada's politicians vote on extending their anti-ISIS mission to include bombing over Syria, and Syria's murdering despot Bashir al Assad - who famously ignored Obama's imaginary  red line -  takes time out to do a 'rehabilitative'  interview with 60 Minutes, many MANY girls like Hudea go unknown by the politicians.  Over the last four years hundreds of thousands of innocent civilians (including many Hudeas) have been slaughtered by Assad, and the world has stood on the sidelines wagging their ineffectual stern fingers and making meaningless pronouncements.


Now, NOW, while the fat cat diplomats and politicians gather to make sweeping public policies,   I can only think about all the little Hudea's whose daily lives continue to be  a hell of terror and survival, if they are 'lucky.'

We, the world community,  should hang our heads in shame.  We should.

Pray for Hudea.  Pray for ALL the Hudea's around the world...