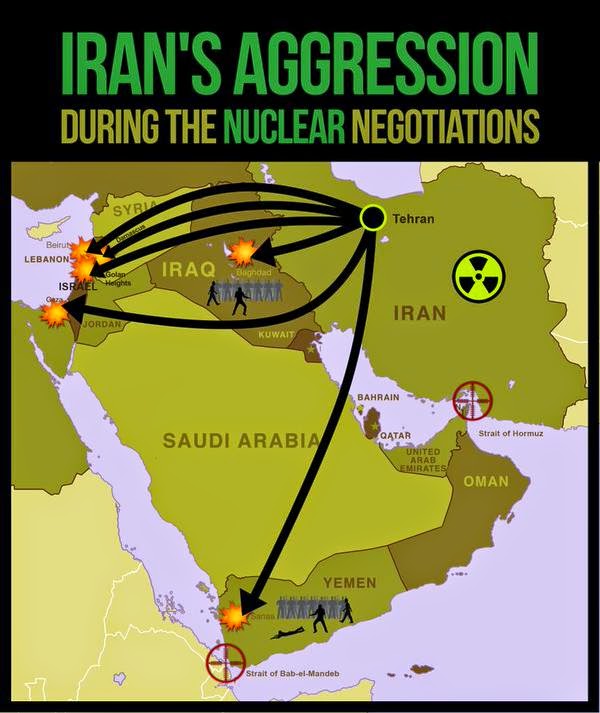 Back in November 2013 I wrote this headline: Iran scores a historic victory: Neda is unavailable for comment 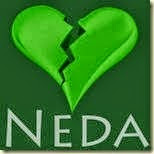 For more on who Neda is, put her name in the search engine at top left.


Today, the world media is full of the current 'Historic deal,' and Neda is still unavailable for comment. 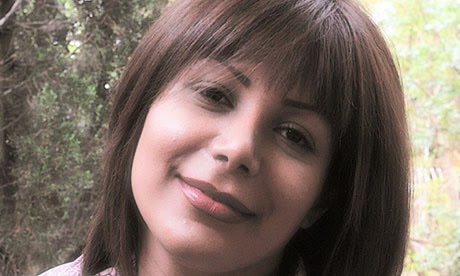 To say that this 'coup for John Kerry' is monumentally stupid, with global implications,  doesn't even come close to my reaction when I first heard this late last night. Am I the only one who noticed that again, the current US administration 'concludes' yet another 'historical agreement' under dark of night? Wonder if they left the washable red crayons at home?

Sadly, these sentiments STILL hold true, as Obama crows about this 'framework' that is dependent on Iran keeping their word...taqiyya mean anything?  Anyone?

As usual, Obama gave a victory speech in the Rose Garden - isn't that where he poses to prove the gravitas of his most insane speeches?  Go watch, if you must.

Basij commander Mohammad Reza Naqdi had this to say during the 'negotiations'.


This is nothing new: Iranian leaders have said it many times before. Still, no one in the West seems to believe that they mean what they say.

The commander of the Basij militia of Iran’s Revolutionary Guards said that “erasing Israel off the map” is “nonnegotiable,” according to an Israel Radio report Tuesday.

Militia chief Mohammad Reza Naqdi also threatened Saudi Arabia, saying that the offensive it is leading in Yemen “will have a fate like the fate of Saddam Hussein.”

Naqdi’s comments were made public as Iran and six world powers prepared Tuesday to issue a general statement agreeing to continue nuclear negotiations in a new phase aimed at reaching a comprehensive accord by the end of June....


Opinions are sharply divided.  We have those with short memories screeching 'three cheers for diplomacy'  as others try to compare Kerry with Winston Churchill in Winter.  As a student of history replied to that insanity: more like Chamberlain in autumn, and that's the truth.

Iranians are celebrating a tenuous 'framework' that demonstrates their short memories. 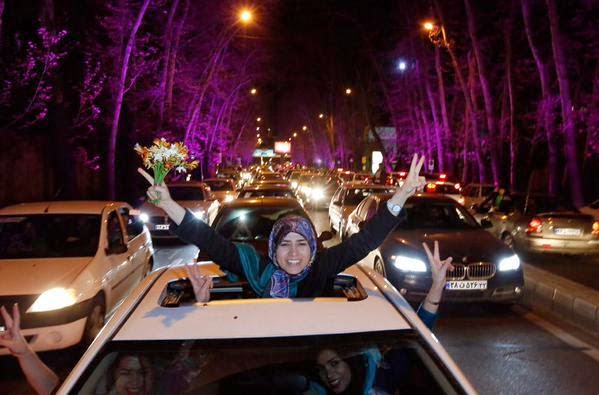 Hundreds of Iranians Celebrate in the Streets After Nuclear Framework Deal Announced
April 3, 2015
AFP – Hundreds of Iranians took to the streets in Tehran early Friday to celebrate a breakthrough in talks with the West that may end the country’s 12-year-long nuclear crisis.

The capital’s longest street, Val-e-Asr Avenue, was lined with cars as drivers sounded their horns in approval of a framework deal intended to lead to a comprehensive agreement with world powers in June.
Read full story.

I guess most of them have forgotten 2009 when protestors  took to the streets in the thousands to beg the US and the west for help in the aftermath of the fraudulent bloody elections. 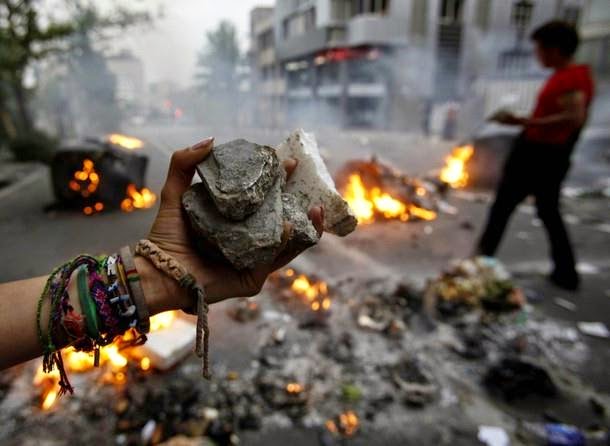 A woman supporter of Iran's moderate presidential candidate Mirhossein Mousavi shows stones used for throwing during clashes with police in Tehran June 13, 2009. Thousands of people clashed with police on Saturday after the disputed election victory of President Mahmoud Ahmadinejad sparked the biggest protests in Tehran since the 1979 Islamic revolution Reuters  [Here for more pictures to remind yourself of the murderous Iranian regimes]

This is now, and apparently, Iranian leaders don't share today's celebratory mood over this 'understanding'.  From The Washington Free Beacon:

Says White House misleading Congress, American people with fact sheet
April 2, 2015
LAUSANNE, Switzerland — Just hours after the announcement of what the United States characterized as a historic agreement with Iran over its nuclear program, the country’s leading negotiator lashed out at the Obama administration for lying about the details of a tentative framework.

Iranian Foreign Minister Javad Zarif accused the Obama administration of misleading the American people and Congress in a fact sheet it released following the culmination of negotiations with the Islamic Republic.

Zarif bragged in an earlier press conference with reporters that the United States had tentatively agreed to let it continue the enrichment of uranium, the key component in a nuclear bomb, as well as key nuclear research.

Zarif additionally said Iran would have all nuclear-related sanctions lifted once a final deal is signed and that the country would not be forced to shut down any of its currently operating nuclear installations.
Following a subsequent press conference by Secretary of State John Kerry—and release of a administration fact sheet on Iranian concessions—Zarif lashed out on Twitter over what he dubbed lies....

"Lies" from the Obama administration?  Say it isn't so....and this from the most well-known liars on the planet.
We, of course, have no clue what any of this 'not a treaty' actually contains, but we DO know that Israel, and rightly so in my opinion, speaks the absolute truth on the consequences of this whole mess.
Israel - who, by the way, were not included in these talks, which is absurd - calls this deal a 'capitulation [which] will give Iran a military nuclear program.'
Prime Minister Netanyahu had this to say earlier today:

Statement by Prime Minister Benjamin Netanyahu regarding the proposed framework for a deal with Iran:

"I just came from a meeting of the Israeli cabinet. We discussed the proposed framework for a deal with Iran.

The cabinet is united in strongly opposing the proposed deal.

This deal would pose a grave danger to the region and to the world and would threaten the very survival of the State of Israel.

The deal would not shut down a single nuclear facility in Iran, would not destroy a single centrifuge in Iran and will not stop R&D on Iran's advanced centrifuges.

The deal would lift sanctions almost immediately and this at the very time that Iran is stepping up its aggression and terror in the region and beyond the region.

In a few years, the deal would remove the restrictions on Iran's nuclear program, enabling Iran to have a massive enrichment capacity that it could use to produce many nuclear bombs within a matter of months.

The deal would greatly bolster Iran's economy. It would give Iran thereby tremendous means to propel its aggression and terrorism throughout the Middle East.

Such a deal does not block Iran's path to the bomb.

Such a deal paves Iran's path to the bomb.

And it might very well spark a nuclear arms race throughout the Middle East and it would greatly increase the risks of terrible war.

Now, some say that the only alternative to this bad deal is war.

There is a third alternative – standing firm, increasing the pressure on Iran until a good deal is achieved.

And finally let me say one more thing.

Iran is a regime that openly calls for Israel's destruction and openly and actively works towards that end.

Just two days ago, in the midst of the negotiations in Lausanne, the commander of the Basij security forces in Iran said this: "The destruction of Israel is non-negotiable."

Well, I want to make clear to all. The survival of Israel is non-negotiable.

Israel will not accept an agreement which allows a country that vows to annihilate us to develop nuclear weapons, period.

In addition, Israel demands that any final agreement with Iran will include a clear and unambiguous Iranian recognition of Israel's right to exist.

I predict that history will prove that this 'not a treaty' with Iran will provide yet more proof of this current US administration's abject failure in foreign policy.  It is my opinion that history will prove that under this administration's watch, the world has become a far more dangerous place for us ALL.  None of this ineptitude would matter if President Obama was still a Chicago community organiser, but such ineptitude on a global scale - in the global arena - is disastrous.  History WILL prove that.  As Spencer says in the first link below:  The catastrophe of this cannot be overstated. The US and the free world will be paying for this deal for a long time to come

I strongly suggest we hold off on the kumbaya chorus.

As always, War on Terror News give an articulate response, and it is important enough to share here:
". It is my opinion that history will prove that under this administration's watch, the world has become a far more dangerous place for us ALL. "


I don't believe we need to wait for the conclusions of History's analysts. I believe we can simply look to an objective comparison of maps, and where Islamism, both Shi'a and Sunni is now in control, vs. where Secular powers once held power. I believe, IF the truth of Islamist terrorism in the West were honestly reported, as opposed to discounting reality for "workplace violence" and "lone wolves," we'd see that the West is far more under attack now, than it was in 2008.


Lest any be confused over what Islamism is, it is the ideology that governments should use Sharia Law as criminal law, that women should be illiterate and covered from head to toe, that allegations of adultery result in stoning to death, that rape victims should be punished for "tempting" men into a crime, that the wives of the enemy are the sex slaves of the Islamists, that gays should be hung, and that non-Islamists should have their heads sawed off with a dull butter knife.


Loss of Freedom and Oppression is no more palatable if it is issued from the Courts, the halls of politics, mobs, or an invasion of violent thugs.


And I'll point out that in a city and nation of millions, it's pretty telling that only a few hundred showed up to support their oppressive government, many of whom were probably celebrating the fireworks, not the "agreement." I will say that the hundreds of thousands that risked life and limb in 2009 are still brewing just under the surface, waiting for the time when victory over their dictator becomes possible.

Related:  Iran runs the table at Lausanne, then brags about US nuke concessions

P5+1, Iran agree on parameters of an agreement over Iran's nuclear program

Did Iran get better deal on nuclear program?
Posted by The Brat at 1:36 AM