This desecration by the Islamist terrorists is not new, but is the latest report of  the ongoing scourge of these ignorants to show their *power* over even the dead.  I suppose that at least in cemetaries, these brave 'freedom fighter militants' (or whatever the label du jour is) can be sure their opponents won't fight back. 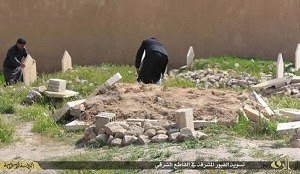 
Islamic State jihadists have released photos on social media of their counterparts in Syria destroying a cemetery by hammering tombs to the ground. The group claims to object to tombs as wrongful worship of the dead, though much of the material was also taken away to use as construction materials.


The Daily Mail has published an extensive library of photos showing the destruction of a cemetery that appears to be on the outskirts of Raqqa, the appointed “capital” of the Islamic State caliphate. The photos show an extensive effort using rudimentary tools to destroy a cemetery tomb by tomb: 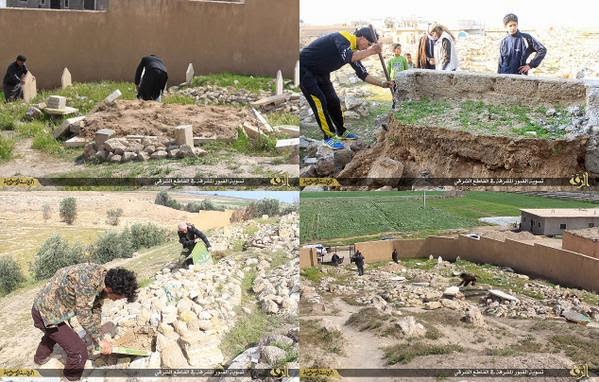 The last image depicting jihadists leaving the site with what could be used as construction materials highlights the growing need for basic goods within the parameters of the Islamic State. While extremely efficient in their attempts at genocide against Iraq’s Yazidi minority, Christians, and other “infidels,” ISIS has struggled to recruit a high enough number of professionals in various necessary fields to provide the services required of a state. As early into the Islamic State project as July 2014, reports began to surface that the Islamic State was significantly lacking enough doctors to care for both wounded mujahideen, badly injured sex slaves, and victims of a mysterious water-borne illness. Raqqa also lacks a sufficient number of engineers to keep roads functional, buildings standing up, oil fields producing, and crops growing.

In January, the Iraqi government announced that the Islamic State was responsible fora 40 percent drop in agricultural production in the past year….

They have more here.

Email ThisBlogThis!Share to TwitterShare to FacebookShare to Pinterest
Labels: ISIS in Raqqa