Much has been written about how, in the not too distant future, muslims will be a large enough segment of British society to affect every aspect of life. With the imminent election, it is now being noted that the muslim vote could decide who the next Prime Minister is.

Islamists demonstrate in the UK against voting in the upcoming May 7 elections.

British Muslims — who voted overwhelmingly for Labour in the 2010 general election — could determine who will be the next prime minister.


The leader of Britain's Labour Party, Ed Miliband, has vowed, if he becomes the next prime minister in general elections on May 7, to outlaw "Islamophobia."

The move — which one observer has called "utterly frightening" because of its implications for free speech in Britain — is part of an effort by Miliband to pander to Muslim voters in a race that he has described as "the tightest general election for a generation."

With the ruling Conservatives and the opposition Labour running neck and neck in the polls just days before voters cast their ballots, British Muslims — who voted overwhelmingly for Labour in the 2010 general election — could indeed determine who will be the next prime minister.

In an interview with The Muslim News, Miliband said:


"We are going to change the law on this so we make it absolutely clear of our abhorrence of hate crime and Islamophobia. It will be the first time that the police will record Islamophobic attacks right across the country."  [because of course muslims *never* attack infidels on the streets of England!  ]

I, for one, would be quite happy if muslims chose to obey the poster above, and were no-shows at the election booth, but that's just me.

After all, is it islamophobia to point out this picture of one of the hundreds of 'demonstrations' islamists held in London? 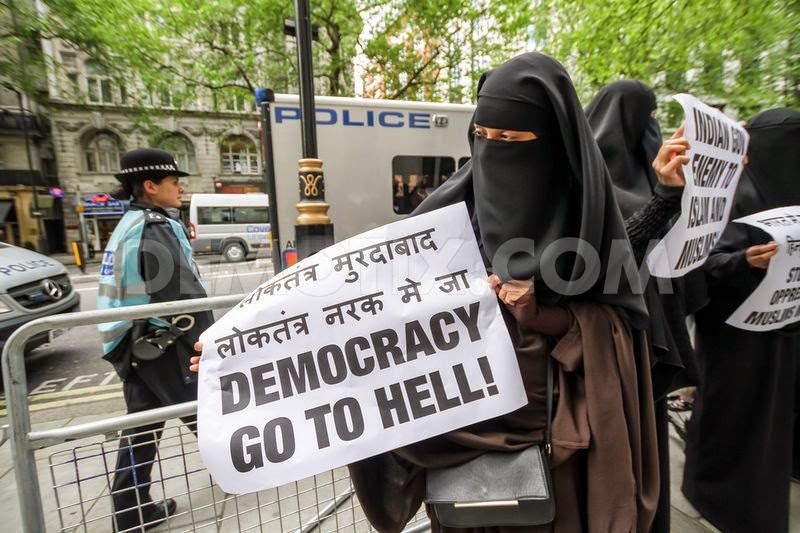 This picture has been commonplace in England these last few years, as the islamists are very clear of their goals for the UK and the world.  Take a look at one of my least favourite people on the planet:

That is from 2011 and the islamists have shown no reticence in screaming their ultimate goal from any street corner in the UK.

This insidious 'religion of pieces' has been a vocal - and very visible - part of  UK society for years and yet, they are allowed to 'protest' because of the tolerance of the very society they insist they will transform: 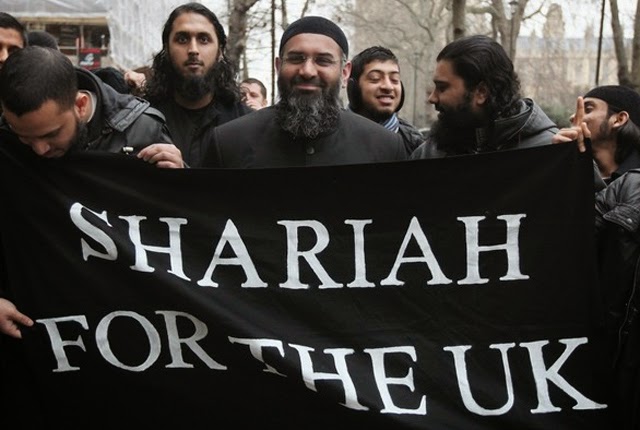 Back in October I wrote "Anjem Choudary proves he is still a scourge."  That was written in the wake of the very public beheading of Soldier Lee Rigby, and Choudary  usual diatribe included  "I don't feel sorry for the beheaded."

Now, in this election, Britons who reject the murderous ideology as practised by Choudary and his sycophants, MUST get out and vote for the denunciation of those whose only goal is to radically change the face of Britain.

London's Holy Turf Wars - MUST WATCH Video
Posted by The Brat at 4:04 AM

Email ThisBlogThis!Share to TwitterShare to FacebookShare to Pinterest
Labels: muslims in UK election