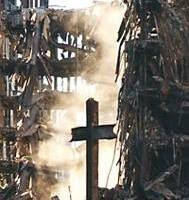 Remember this iconic image of the terrible day in 2001?  Islamic Terrorists murdered almost 3,000 innocents,  as they attempted to bring New York, and America to its knees?  Among those 3,000 were First Responders: EMT, FireFighters, NYPD who rushed in to save as many lives as humanly possible.

Keith was one who ran towards the madness as others ran out. Check out here and here

Along with Keith, we lost 343 FDNY, 37 Police Officers of  New York Port Authority, 23 of NYPD and eight EMT's from private emergency medical services.

The number of  lives destroyed that day - on home soil - is almost unimaginable, but the losses continue..  As you read this, I guarantee that First Responders who escaped with their lives that day, continue to lose their tenacious battles and become part of the ongoing losses - legacy -  of 9/11...

Just about every day,  the men and women who managed to walk away from 9/11, years later succumb to the silent killer that infected/affected every single person there on 9/11 and on the pile in the following days, weeks and months:

From the New York Daily News via Russia Today in September 2014: 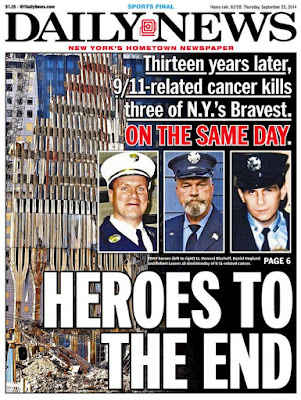 Lt. Howard Bischoff, 58, and firefighters Robert Leaver, 56, and Daniel Heglund, 58, died within hours of one another Monday. Bischoff had colon cancer, Leaver had leukemia and Heglund had esophageal cancer. Many believe the diseases were related to their time serving as first responders at the World Trade Center in the immediate aftermath of 9/11. FDNY officialsy 850 firefighters and ambulance workers at the scene have been diagnosed with cancer since then, related to that work at Ground Zero.


"Losing three firefighters on the same day to WTC-related illnesses is a painful reminder that, 13 years later, we continue to pay a terrible price for the Department's heroic efforts on September 11th," Fire Commissioner Daniel Nigro said in a statement....


Much more here.. While there, check out the related stories in the sidebar.

Unfortunately, these three are not unique.  It is recorded that since 9/11 we have lost  approximately 1,800 souls as a direct result of the toxic environment on the pile.

STATS AT A GLANCE​
​30,000+ Responders / Survivors Have More than One 9/11 Related Health Condition


​Over 71,000 Are Currently in the Health Program Which Covers Responders / Survivors from All Three Attack Sites

AND Their Care is Provided in All 50 States
Reference:  World Trade Center Health Program participants by Congressional District CDC/NIOSH November 2014

​429 Out of 435 Congressional Districts Have Responders/Survivors of the September 11th Attacks Residing in Them
​Reference:  World Trade Center Health Program - Annual Statistics as of 9/30/2014


Each year,  9/11 Rescue Workers and Friends put together a video to Honor and Remember  those First Responders who fight their last battle.  Take a look at 2014

On the 9/11 Rescue Workers and Friends site its is stressed just how important it is for this Bill to pass.  PLEASE go here, and read a brief  history of the bill, plus simple instructions on how you can help persuade any undecided politicians that approving this Bill is the only morally acceptable response from them.


I have previously written about Zadroga, and the absolute imperative for these brave men and women to be properly taken care of.   If you are interested, put Zadroga in the search engine thing above,...


In April 2015 I shared a video that puts a human face onto the critical reasons US politicians should recognise that they must re-authorise the Zadroga Bill.  To do anything else is morally reprehensible.


To most people, those names, those faces of our First Responders Survivors, who years later succumb to the environmental impact of that infamous day, will never be known.  They are mourned  by those who love them, and acknowledged by those who stood the line with them on 9/11, and still fight on against the diseases they gained from that day.... 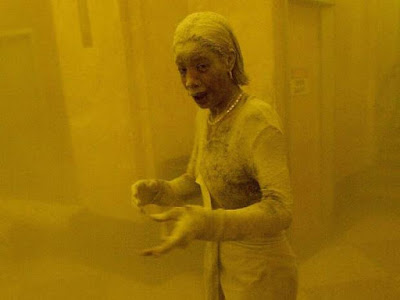 Among the madness of that day, this woman's picture became iconic.  Marcy Borders was an anonymous civilian  - a bank employee - whose picture demonstrated that the horrors of 9/11 showed no favour:  Men, women, children; civilian or official First Responders; the murderers showed no mercy.. Marcy Borders died a couple of weeks ago from stomach cancer.


That Marcy Borders,  and so many other survivors of that day, continue to pass away all these years later, should be a graphic constant  reminder to the politicians *debating* the re-authorisation of the Zadroga Bill.  This latest iteration of the Bill under debate  has a provision in it,  that limits the deserved  - earned - help to ANY of the Fallen to oh, 25 years as this latest debate suggests, is beyond absurd.  For the survivors of 9/11, who live with damaged bodies and minds, time is meaningless, and the Zadroga Bill guarantees should not be limited to any time frame.  Period.

The rising toll of Ground Zero responders and others afflicted with 9/11-linked cancers has hit 3,700.

The staggering tally of those suffering cancers certified by the feds as 9/11-related includes FDNY members (1,100), cops and other Ground Zero responders (2,134), and survivors such as downtown workers and residents (467). Many have more than one type of cancer.

The FDNY’s chief medical officer, Dr. David Prezant, said over 2,100 firefighters and EMS personnel have retired on disability with World Trade Center-related illnesses, mostly lung disease and cancer, since 9/11.
The grim toll includes 109 FDNY responders who have died from WTC-linked illnesses, 44 of them from cancer.

Research has found thyroid, colon, prostate and blood cancers more prevalent among FDNY members who served at Ground Zero than those who did not, a spokesman said.....

There is more here on the long term effects of 9/11, which has to beg the question to the politicians: What the hell is there to discuss about Zadroga Bill?

Newsday has a hard hitting op/ed on the Congress' dragging their heels about the reauthorisation of the Zadroga Bill:

People are dying, from those who fled as the buildings collapsed to those who ran in to help, and the many who worked at the site for weeks afterward. And instead of doing all it can for those who are still living, Congress is making a tragic situation even worse.

The 9/11 World Trade Center Health Program expires this fall. It's one of two programs -- the other is the September 11th Victim Compensation Fund -- under the Zadroga 9/11 Health and Compensation Act. The act became law in early 2011, and had a five-year window.


Soon, those who are ill won't know whether their medication and treatment will be covered. By next year, the funding will dry up altogether. David Howley, a former NYPD officer who worked at Ground Zero and has fought neck cancer and other illnesses, is among many now fighting Congress just to continue the programs that kept him alive.


Howley shouldn't have to fight this fight. It's time for the absurdity to end. Congress must make the act permanent -- so the tens of thousands of victims battling disease and injury from the 9/11 attacks can stop making the trek to Washington to plea with lawmakers.


It must become our battle, too.


More than 33,000 people are ill or injured related to the Sept. 11 attacks, and more than 70,000 are being monitored for possible symptoms and illnesses. There are residents from all 50 states, and all but six congressional districts.


They include your neighbors, friends, family members and heroes...


As our First Responder survivors of 9/11 wait for the politicians to decide if the Zadroga Bill should be reauthorised, another group of Americans directly impacted by the terrorist attack, also wait for justice, albeit in a different arena.  These survivors will also continue to pay an unbearably heavy price for that day 14 years ago. 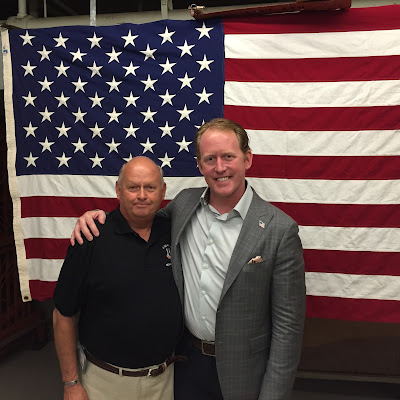 This picture, of course, is Ken Fairben, dad of Keith G Fairben: A Beloved American Son and Rob O'Neill, the SEAL who shot Osama bin Laden.

Ken and Diane, Keith's mom,  along with all the other Families and Survivors of 9/11  have been waiting now for 14 years for justice.  Long time readers here know that Military Commissions have been ongoing at the GITMO base, as self-confessed murderer Khalid Sheik Mohammed, et al, have their every need met as the judicial process limps along.    The 9/11 families dig ever deeper for patience as the wheels of justice grind ever more slowly.  These delays of course are all part and parcel of ensuring that the alleged (*ahem*) perpetrators of 9/11 continue to evade sentencing and punishment, as their defence lawyers keep bringing forth motions which contribute to the snails' pace.

In recent months, TWO scheduled Hearings in the 9/11 proceedings have been cancelled, and yes, the Hearings for the USS Cole atrocity are also nowhere near the day of justice being done.

Diane and Ken get regular updates on the status of the Hearings from the Office of the Chief Prosecutors, and this was one of the most recent: 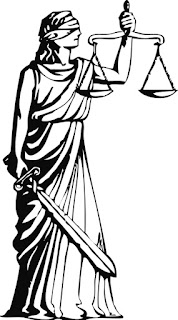 The hearings scheduled from 24 August - 4 September 2015 have been cancelled.  To the extent that we can ascertain an explanation, due to being walled off from the Special Review Team's litigation, there are still issues unresolved in AE292, Emergency Joint Defense Motion to Abate Proceedings and Inquire into Existence of Conflict of Interest Burdening Counsel's Representation of Accused.
The next scheduled hearings in U.S. v. Khalid Shaikh Mohammad et al (2) are scheduled for 19-30 October, and 7-11 December 2015.


President Obama and Eric Holder should take more than a little responsibility for the crawling along of these proceedings (but they won't, of course.)  From his second day in office, Obama made clear his goal to close GITMO.   Most recently we have seen a re-establishment of relations with Cuba.  Only the most simple of minds could fail to see that this deal with Cuba is yet another ploy by this administration to close GITMO.  Don't believe me?: Castro demands Guantanamo Bay in return for US-Cuba diplomatic deal.

Inconveniently for Obama, his previous efforts to close GITMO have consistently been stymied by Congress.

However, despite that defeat, it is no time for complacency OR partisanship in DC. As we have seen over the years, Obama never gives up on his political agenda, and GITMO is no exception.  Just as with many other rulings that Obama has ignored, (ObamaCare, Iran?) so here could he also  over-ride opposition to GITMO closure by issuing another of his many Executive Orders.


As we pass yet another anniversary of  9/11, I have a very simple request for Barack Obama:  Dispense with all the partisan rhetoric and 'debate' ...and sign into law, in perpetuity, the Zadroga Bill which will ensure that ALL our survivors will never again have to worry that their health needs will entail long drawn out debate.  Our First Responder Heroes have more than earned such peace of mind, for themselves and their families.

Part two of my request?  Keep the hell out of the Military Commisions, and just quit releasing any GITMO inmates in yoiur cynical attempts to 'honour' one of your  early, ongoing election campaign promises, as you continue to try and close GITMO.

Your loyalty, Mr Obama, should be to America and those brave Americans who demonstrated such incredible courage on 9/11, and our 9/11 survivor families who day in, day out, continue to wait for justice.

Time to do the HONOURABLE thing, Mr Obama 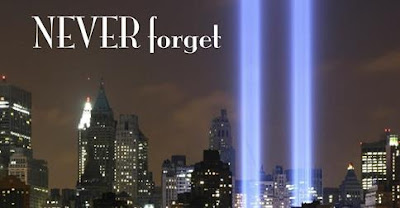 Jon Stewart To Walk Halls Of Congress With 9/11 Responders


Ground Zero Survivors still battling health problems
Posted by The Brat at 11:18 AM