From One Marine's View: 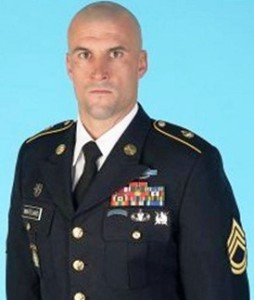 A Green Beret ordered discharged after he and his team leader body-slammed an alleged Afghan child rapist is speaking out against the Army's effort to punish him, as he fights to stay in the service.


If you didn’t know, boy rape is very prevalent throughout Iraq and Afghanistan and the culture there. There are several accounts of Taliban fighters going into villages, killing and raping children and adults.


'Kicking me out of the army is morally wrong and the entire country knows it.'


FOX News has this:

[...]  A Green Beret ordered discharged after he and his team leader body-slammed an alleged Afghan child rapist is speaking out against the Army's effort to punish him, as he fights to stay in the service.

"Kicking me out of the Army is morally wrong and the entire country knows it," Sgt. 1st Class Charles Martland said, in his first public statement on his case.


The detailed written statement, requested by Rep. Duncan Hunter, R-Calif., was shared by the congressman's office with FoxNews.com. Hunter, who has advocated on Martland's behalf, intends to submit the statement to the House Armed Services Committee.

Martland's case has received renewed attention amid recent press reports on the U.S. military's handling of child abuse allegations involving Afghan allies. In his statement, Martland gives a blunt account of the September 2011 encounter with the "brutal child rapist," local police commander Abdul Rahman. He acknowledges the confrontation, but suggests the commander exaggerated his injuries -- and argues that the boy's safety, as well as American lives, was at stake that day. ...

FOX has more - including a video clip - here.


Bouhammer has a piece up on this travesty.


In the case of SFC Martland, it is truly disgusting because in the Army we teach and are taught that we should all do the HARD RIGHT instead of the EASY WRONG. This is what separates the sheepdogs from the sheep. Standing up for what is right and having the courage and intestinal fortitude to do it. Trust me it is not easy and many times, not possible. Our soldiers are put in the middle of a rock and a hard place when they see something as horrific as child rape and abuse happening, or even soldier male on male rape happen. And also know that they are told by all levels “it isn’t our job to install our values into their culture” and to know that if they offend, humiliate and piss off the same Afghans who’s protection our vulnerable soldiers depend on for force protection could cause an American’s death...


SFC Martland isn't the first Soldier to be treated this way by our Military;  he won't be the last who chooses the "HARD RIGHT" course of action.


[Related: SFC Martland's appeal rejected  ]
Posted by The Brat at 3:29 AM