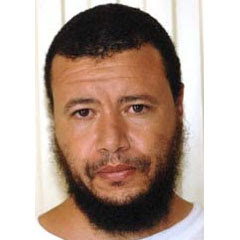 The Department of Defense announced today the repatriation of Younis Abdurrahman Chekkouri from the detention facility at Guantanamo Bay to the Government of Morocco.


As directed by the president's Jan. 22, 2009, executive order, the interagency Guantanamo Review Task Force conducted a comprehensive review of this case. As a result of that review, which examined a number of factors, including security issues, Chekkouri was unanimously approved for transfer by the six departments and agencies comprising the task force.


In accordance with statutory requirements, the secretary of defense informed Congress of the United States' intent to transfer this individual and of the secretary's determination that this transfer meets the statutory standard.

All well and good, but wait!  Back in April 2011, The UK Telegraph had this summary of this latest release:


Memo date: 11/03/2008
Detainee Summary: If released without rehabilitation, close supervision, and means to successfully reintegrate into his society as a law-abiding citizen, it is assessed detainee would probably seek out prior associates and reengage in hostilities and extremist support activities. Since his transfer to JTF-GTMO detainee has been somewhat compliant with the guard force, but has one incident of threatening to kill a guard. He is non- CLASSIFIED(S) cooperative with debriefers and withholds information of intelligence value, probably indicating his continued support for Islamic extremism. Detainee co-founded the Moroccan Islamic Fighting Group (GICM) and served as the head of its Military Commission.1 He formerly oversaw GICM operations in Afghanistan (AF), Syria (SY), and Turkey (TU). Detainee is assessed to have been a close Usama Bin Laden (UBL) associate who played a central role in coordinating mutual support between the GICM and al-Qaida, to include providing GICM fighters to support al-Qaida combat operations in Afghanistan and terrorist attacks Europe. Detainee is assessed to have engaged in hostilities against US and Coalition forces as the GICM senior commander on the Bagram front lines and at Tora Bora, and was captured with other extremist fighters fleeing Tora Bora. Detainee ran the Moroccan Training Camp at the Derunta Training Complex and trained militant fighters in explosive detonators, chemical weapons, and military tactics at the Algerian Guesthouse in Jalalabad, AF, and at Derunta. Detainee has familial ties to the GICM and al-Qaida members, including former JTF-GTMO detainees who have attempted to reconstitute the GICM. Detainee is assessed to be a high risk to who is likely to reaffiliate with the al-Qaida network as a senior commander and resume hostilities upon release.

Health: Detainee is in good physical health with no significant medical problems.

Threat to US: HIGH

Go read more on this release here, as this administration's divert and distract policy continues...