Bizarre/outrageous as that may sound, the spin continues about Bowe Bergdahl the victim.

From the Christian Science Monitor:

The general who led the investigation into Sgt. Bowe Bergdahl's alleged desertion in Afghanistan urged compassion for the 'unrealistically idealistic' soldier.

The Army general tasked to lead the investigation into Sgt. Bowe Bergdahl’s capture by the Taliban testified Friday that he believes jail time for the soldier would be “inappropriate.”


Instead, Maj. Gen. Kenneth Dahl urged some measure of compassion for the “unrealistically idealistic” Sergeant Bergdahl, who he added was remorseful that his disappearance caused panic and a massive search by his fellow soldiers. “I do not believe that there is a jail sentence at the end of this process,” Major General Dahl told the military court at Joint Base San Antonio-Fort Sam Houston, Texas.


It remains to be seen what the impact of this recommendation will be. The proceedings, known as an Article 32 hearing in military parlance, were convened Thursday to determine whether Bergdahl should face a court-martial for leaving his small outpost in eastern Afghanistan in June 2009....

Yes, there is more here.   Be sure to also check some of the links in the sidebar.
Related: Bergdahl’s lawyer: It was only one day AWOL 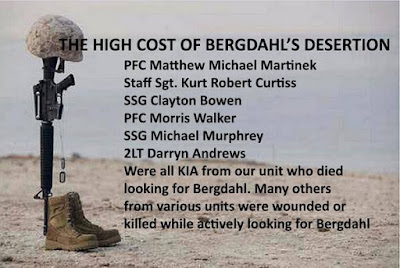 (graphic via Mike Mullins)
Posted by The Brat at 5:55 AM