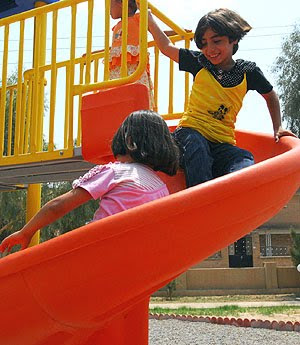 Children enjoy their new playground following an opening ceremony attended by the US soldiers, Iraqi government and police officials who spearheaded the project in Taba, near Kirkuk, Iraq, August 17, 2010. US Army photo by Spc. J. Luhrs.


KIRKUK – U.S. Soldiers joined local government and police officials near here recently in the village of Taba to officially open a new playground for local children.

The $49,000 playground, which took less than a month to complete, is made up of three slides, a large play tower, monkey bars, a field for soccer and multiple picnic tables for the more than 100 families who live in the area.

“We wanted to demonstrate our commitment to the citizens of Kirkuk and show them we do more than advise the police,” said the Savannah, Ga., native. “What better way than to build a playground for the community?”

Cornthwaite added that his unit and their Iraqi counterparts pushed for this project to better instill a sense of family in the area.

“Kirkuk’s culture is very family-oriented, so by providing a venue where families can come together allows them to embrace family-ties and associates us as an extended family,” he said.

The Iraqi contractor for the project feels they have made the community a better place.

“The playground is a place where children and adults can come together in hope for a better future,” he said. “This playground may seem like something small but it will make a very big impact on the community.”

This will be front page news in the msm, NOT! But you can find this and more B*N*S*N stories here.
Posted by The Brat at 8:26 AM