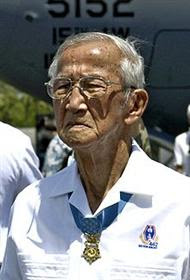 On September 16 Mr. Hajiro will turn 94 years old. His family immigrated from Japan during WWI and he had to drop out of school and work to help support his family. After Pearl Harbor was attacked he was drafted in the United States Army. In March 1943, he volunteered to join the 442nd Regimental Combat Team, composed of Nisei (second-generation Japanese Americans) like himself. He was shipped to Europe in 1944 first to Italy then to France where, over ten days in October, Pvt. Hajiro repeatedly distinguished himself in battle by exposing himself to enemy fire while assisting an allied attack. On October 29, 1944 Pvt. Hajiro single-handedly destroyed two German machine gun emplacements before being shot in the shoulder and wrist partially paralyzing his left arm. For his actions he was awarded the Distinguished Service Cross. In 1948 he was awarded the Military Medal by the British government, in 2000 was was awarded the Medal of Honor by President Bill Clinton and in 2004 he was awarded the Légion d'honneur by France. Barney F. Hajiro is the oldest living Medal Of Honor recipient.

From his Medal Of Honor Citation:

For The President of the United States of America, in the name of Congress, takes pleasure in presenting the Medal of Honor to Private Barney F. Hajiro, United States Army, for conspicuous gallantry and intrepidity in action above and beyond the call of duty while serving with Company I, 3d Battalion, 442d Regimental Combat Team, attached to the 36th Infantry Division, in action against the enemy on 19, 22, and 29 October 1944, in the vicinity of Bruyeres and Biffontaine, eastern France. Private Hajiro, while acting as a sentry on top of an embankment on 19 October 1944, in the vicinity of Bruyeres, France, rendered assistance to allied troops attacking a house 200 yards away by exposing himself to enemy fire and directing fire at an enemy strong point. He assisted the unit on his right by firing his automatic rifle and killing or wounding two enemy snipers. On 22 October 1944, he and one comrade took up an outpost security position about 50 yards to the right front of their platoon, concealed themselves, and ambushed an 18-man, heavily armed, enemy patrol, killing two, wounding one, and taking the remainder as prisoners. On 29 October 1944, in a wooded area in the vicinity of Biffontaine, France, Private Hajiro initiated an attack up the slope of a hill referred to as "Suicide Hill" by running forward approximately 100 yards under fire. He then advanced ahead of his comrades about ten yards, drawing fire and spotting camouflaged machine gun nests. He fearlessly met fire with fire and single-handedly destroyed two machine gun nests and killed two enemy snipers. As a result of Private Hajiro's heroic actions, the attack was successful. Private Hajiro's extraordinary heroism and devotion to duty are in keeping with the highest traditions of military service and reflect great credit upon him, his unit, and the United States Army.

All Information Was Found On And Copied From MilitaryCity.com

These brave men and women sacrifice so much in their lives so that others may enjoy the freedoms we get to enjoy everyday. For that, I am proud to call them Hero.
We Should Not Only Mourn These Men And Women Who Died, We Should Also Thank God That Such People Lived

That's really honorable. It's good to have an uplifting story like this, and he deserves the notice.