The American Muslim Political Action Committee (AMPAC) is organizing what it hopes would be a mass demonstration by American Muslims on 11 September in Washington, D.C. Critics called the demonstration ill-timed, if not downright offensive. Mainstream Muslim American groups describe group members as virulently anti-Semitic “truthers” who question al Qaeda’s responsibility for the 9/11 attacks. There is little chance a million people would show up for the march: AMPAC, based in Kansas City, Missouri, has just 57 supporters signed up for the 11 September event on Facebook.

The demonstration was initially called the “Million Muslim March,” but AMPAC later changed the name of the event to “Million American March against Fear.”

The organizers say the purpose of the March is to complain about religious profiling and abut President Obama’s handling of an investigation into the 9/11 terror attacks.


Fox News reports that AMPAC claims American Muslims have been the victims of anti-Islamic bigotry in the years following 9/11 al Qaeda terrorist attacks.


“On 9.11.01 our country was forever changed by the horrific events in New York. The entire country was victimized by the acts done on that day,” the group said in a statement. “Muslim and Non-Muslim alike were traumatized but we as Muslims continue 12 years later to be victimized by being made the villains. To this day every media outlet and anti-Islamic organization has committed slanderous and libel statements against us as Muslims and our religion of Islam.”


“Yet our Government either sits idly by and does nothing to protect our freedoms or it exacerbates the problem with its constant war on terrorism in Islamic countries, congressional hearings on Islam in America, and its changes to the NDAA law,” the statement says.


M. D. Rabbi Alam, one of the march’s organizers, told Fox News’ Sean Hannity last Thursday that the demonstrators will stand on that day to “show America that we Muslims denounce terrorism.” [Emphasis mine.]

Read the rest of this report here.

Maybe I have been sleeping, and missed something, BUT I have heard less than a handful of Muslims - anywhere in the world - publicly denouncing the terrorist acts on 9/11/2001.  Further, do I need to remind ANYone that every one of the 9/11 murderers were Muslims?  No, I didn't think so.

The organisers can change the name of this *march* to whatever they like (is America a great country or what???) but to deliberately stage such an event on 9/11?   'Ill-timed'?  'Offensive'? No, flat out WRONG!

The best way to counter bad speech is to oppose it with good speech. Sometimes “speech” can be expressed simply by the number of people who are willing to show up to support a principle. That’s the view that hundreds of bikers (so far) across America have as they prepare to join a “2 MILLION BIKER RIDE TO DC” to counter the planned September 11 “Million Muslim March” on DC.

Ugly though the Million Muslim March is, it’s taking place in America and we value and protect free speech – even if it’s ugly, hate-filled speech. Freedom loving people also understand that the best way to oppose bad ideas in the marketplace of ideas is to counter with good ideas. To that end, a group of bikers has created a Facebook page to promote “2 MILLION BIKERS TO DC”: 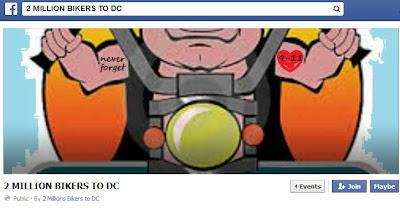 Go check out the links above for more info...BE informed.

More opinion on the Million Muslim March from The Clarion Project:

Million March Against Fear on 9/11 Linked to Islamist Radicals

Promoters of the march are Islamists promoting a pro-sharia agenda for the West. They have been joined by 9/11 "truthers."

In multiple media appearances, the organizers of the Million American March Against Fear (formerly the Million Muslim March), which will be held on September 11, claim that the march is being held to battle fear, discrimination and human rights violations.


Yet the organizers of the march are linked to Islamists promoting a sharia agenda for America and the West as well as conspiracy-promoting 9/11 "truthers." (In fact, according to one of the organizers, the name of the march was changed to accommodate non-Muslim 9/11 conspiracy theory groups.)
The march is being organized by American Muslim Political Action Committee (AMPAC).  On its website, AMPAC says:

Other interesting assertions and opinions here.   [Okay, so can't link to that, so try http://www.clarionproject.org/analysis/million-muslim-march-911-linked-islamist-radicals ]...Well worth the read.

Email ThisBlogThis!Share to TwitterShare to FacebookShare to Pinterest
Labels: Million Muslim March on 9/11