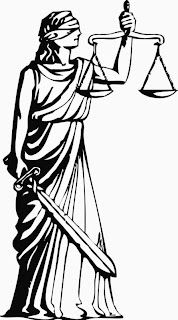 The quest for justice against the 9/11 co-conspirators is still ongoing at GITMO Military Tribunals..As various GITMO notorious alumni might be grabbing headlines, the "alleged" perpetrators of the worst terrorist attack - thus far - on US soil, continue to manipulate the American justice system to delay paying the piper.

Two weeks ago, the Tribunal was convened for one of its regularly scheduled sessions.. Ultimately, what should have been one week's worth of Hearings became but one MORNING, as the defendants continued to prove their utter contempt for American rule of law.

First there was this, from the Miami Herald:

Khalid Sheik Mohammed and the others return to court for a four-hour hearing, their only one of the week, that goes no further in resolving what defense lawyers consider a paralyzing conflict-of-interest question.

GUANTANAMO BAY NAVY BASE, Cuba -- Lawyers for the 9/11 accused sparred with a federal attorney Thursday over whether FBI agents secretly questioning their staff stirred a potential ethical issue that paralyzes progress in the case. The judge didn’t resolve it.

Meanwhile, the alleged Sept. 11 plotters waged a silent protest by donning Palestinian attire. The alleged mastermind, Khalid Sheik Mohammed, wore a black checked headdress to court instead of his typical red one and his nephew, Ammar al Baluchi, traded his usual Kuwaiti headscarf for a Palestinian skullcap in what defense attorney James Connell called a “mute, silent expression of solidarity with the people of Gaza.”

David Nevin said his client Mohammed — who once bragged he was responsible for the Sept. 11 attacks “from A to Z” — was so disturbed by news accounts that he had written President Barack Obama directly, about Gaza and “a number of matters.” He called the headscarf switch “a statement of solidarity for the Gazans, for the Palestinians, about what is going on in Gaza right now.”

The lawyers for the five men accused of training, financing, and organizing the 19 hijackers of the Sept. 11 attacks explained the protest after a four-hour hearing. It was their only collective war-court date this week in the case that has been shadowed by the defense lawyers’ discovery that FBI agents had secretly been talking to some defense-team members....

Yes, there is more on that week's GITMO's shenanigans here.

As referenced above, KSM who boasts of his role in the tragedy of  9/11, felt the need to share his thoughts on world events with the current POTUS:


Accused 9/11 mastermind has written to Obama; Will U.S. military let letter out of Guantánamo?

GUANTANAMO BAY NAVY BASE, Cuba -- Khalid Sheik Mohammed, the man who once bragged that he ran the Sept. 11 terror attacks “from A to Z,” has written President Barack Obama about his views on the situation in Gaza and other current events.

But the military has yet to say if and how it will ever reach the White House.

Mohammed’s defense attorney, David Nevin, disclosed the existence of the letter at a news conference Thursday. In it, he said, Mohammed complains about “Muslim oppression at the hands of the West in general and the United States in particular.” Topics include his views on what happened in Iraq during the period of U.S. sanctions and “events in Palestine and Gaza over the years.”

Nevin said he doubts the letter contains classified information — although he noted that Obama, as president of the United States, has the sweeping power to declassify it.

Meantime, the question remained open Friday: Who has the authority to mail a letter from the alleged 9/11 mastermind to the Constitutional Law professor turned commander-in-chief from a place where the war court is still resolving which portions of the U.S. Constitution apply?

More from Carol Rosenberg on this latest here.... Many other links there  to different aspects of the ongoing Tribunal.

Meanwhile, maybe somebody should tell KSM that a) nobody gives a damn what he thinks or b) even if MIC did care, he is far too *busy* on the golf course.

As always, the Office of Military Commissions site has regular updates/transcripts.

Related:  Defense lawyers: How would Gitmo convict be executed? -

GUANTANAMO BAY NAVY BASE, Cuba — Defense attorneys for the likely first former CIA captive to get a death-penalty trial at Guantanamo asked a war court judge Tuesday to order the Pentagon to declare how the U.S. military would execute the alleged USS Cole bomber, if he’s convicted.

The question came up at a pretrial hearing in the case of Abd al Rahim al Nashiri, 49, accused of orchestrating al-Qaida’s suicide bombing of the USS Cole warship off Yemen in October 2000. Seventeen U.S. sailors died in the attack.

The Saudi’s defense lawyers invoked a string of botched U.S. executions by lethal injection in their argument that the Pentagon should settle on a mode of military execution before Nashiri’s proposed February trial....


The rest of this one is here.


Read more here: http://www.miamiherald.com/2014/08/14/4290191/guantanamo-911-plotters-don-palestinian.html#morer#storylink=cpyGITMO
I am on the record as stating I do not believe that our 9/11 families and others directly affected by that day will see justice during the current POTUS' tenure. His actions have proved that he has more concern for the 'rights' and freedoms of the GITMO residents than he does for the safety of US citizens (recidivism rates of the GITMO alumni, anyone?)  He continues to pursue his oft-repeated election promise to close GITMO, and continues to arbitrarily release detainees - most recently without congressional approval of the notorious five in exchange for Bergdahl. Not bad for "we don't negotiate with terrorists" huh?

Be that as it may, I DO hold fast to my belief that there WILL be justice for our 9/11 families. Even if the majority of the msm has moved on, ultimately all the manipulations and games by the 'defendants' will end, and justice WILL be seen to be served..