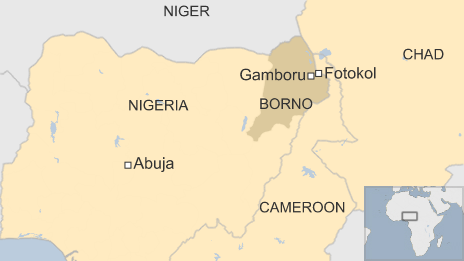 Boko Haram militants have reportedly killed at least 70 people in an attack on the Cameroonian town of Fotokol, on the border with Nigeria.

The Islamist militants attacked civilians in their homes and in the town's mosque, local officials said, setting many buildings on fire.

The attack comes a day after a regional force said it had driven the militants from a Nigerian town near Fotokol.

The Boko Haram insurgency has left thousands dead over the last six years.

More than a million people have also been displaced by the militants, who now control a large stretch of land in north-eastern Nigeria....

There is more on this atrocity (which adds to the daily slaughter by these thugs) here.

There may be hope that Boko Haram will be slowed down, as the African Union has said they will send 7,500 Troops to fight the war against these terrorists..  Read more on that: