'Jihadi John' went to Syria while on UK watch list 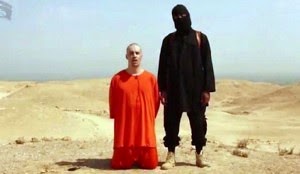 There is just so much wrong with ALL of this terrorist's story, I wish it was unbelievable.


“Jihadi John” is UK university graduate who flew to Syria while on watch list
FEBRUARY 26, 2015

Emwazi is both a university grad and a name on the UK’s terror watch list, thus providing a commentary on both the poverty-causes-terrorism dogma and the efficacy of Supine Britain’s counter-terror apparatus. “Jihadi John unmasked: Former Westminster University student was arrested FIVE years ago and put on a terror watch list – but he flew to Syria to join ISIS two years later,” by Mark Duell, Martin Robinson and Emma Glanfield, MailOnline, February 26, 2015:


The Islamic State executioner known as ‘Jihadi John’ was today revealed to be a university graduate from London who flew to Syria despite being on an MI5 terror watch list.

Mohammed Emwazi, 27, of Queen’s Park, west London, who studied computer programming at the University of Westminster, is said to have travelled to the Middle East in 2012 and later joined ISIS.

Meanwhile, the politicians continue their EPIC FAIL as they would have us all believe that these murderous terrorists are just poor uneducated kids.  Whateverrrrrrrr!
Posted by The Brat at 2:40 AM