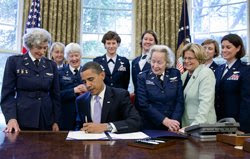 ARLINGTON, Va. - She was among the Air Guard’s handful of women fighter pilots that first took to the sky.

The moment came more than 65 years after the WASP’s ground-breaking war effort.

President Barack Obama signed the bill at the Oval Office July 1 authorizing the award. Three members of WASP as well as five active duty United States Air Force pilots, who followed in their footsteps, including Doorenbos, were at the Oval Office during the bill signing.

"The Women Airforce Service Pilots courageously answered their country’s call in a time of need while blazing a trail for the brave women who have given and continue to give so much in service to this nation since," said President Obama. "Every American should be grateful for their service, and I am honored to sign this bill to finally give them some of the hard-earned recognition they deserve."

With the Presidential Medal of Freedom, it’s the nation’s highest civilian award, of which the Tuskegee Airmen were recent military awardees.

“It’s long overdue and well deserved,” said Doorenbos of the WASP, who said she could probably count on one hand the number of female fighter pilots in the Air Guard when she joined her squadron.

According to a White House press release, “from 1942 to 1943 more than 1,000 women joined the WASP. Thirty-eight of them made the ultimate sacrifice for their nation in performing its mission. But their contribution went largely unrecognized for years, not even being acknowledged with veteran status until 1977.”

Officials said “the groundbreaking steps taken by the WASP paved the way for hundreds of United States servicewomen combat pilots who have flown fighter aircraft in recent conflicts.”

“The WASP are role models for all,” said Doorenbos. “They had the courage to step forward and do something that was so totally outside the expectations of that era. I really respect those who do that.”...(source)