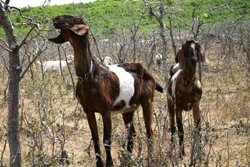 Jason Garn checks on his goats, which are being used by the Utah Army National Guard to create a firebreak on Camp Williams, located near Salt Lake City. The goats have proved their worth during more than one fire season. (Photo by LTC Hank McIntire, Utah National Guard)

Utah Guard enlists the help of a few, good goats

CAMP WILLIAMS, Utah (7/27/09) - When it comes to fighting wildfires, many immediately think of water or fire retardant dropped from helicopters and other aircraft, or soot-covered firefighters using hoses and foam to battle back towering blazes.

Few people, however, think of goats as a firefighting tool, but goats are exactly what the Utah National Guard is using to lessen the potential of wildfires here at Camp Williams, located near Salt Lake City.

The Utah Guard has enlisted more than 1,200 goats and sheep to consume fire fuels, such as sagebrush and oak brush, before this year’s fire season, said Sean Hammond, manager of the Utah Guard's Integrated Training Area.

Who knew? This is an interesting story, so go read the rest of it here. Your high tech military dollars at work.
Posted by The Brat at 5:21 AM