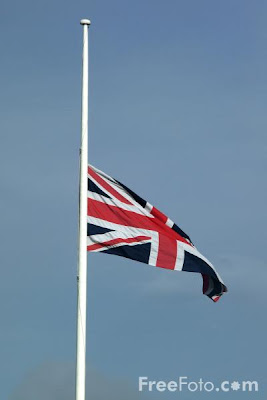 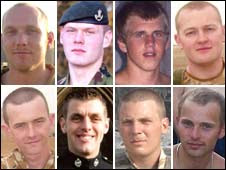 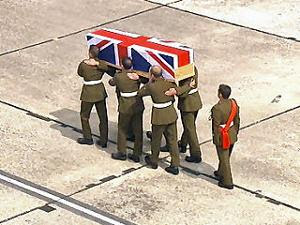 The bodies of eight British soldiers killed in Afghanistan in a single 24-hour period have been flown back home to Britain.

Thousands of people are expected to line the streets as their coffins are driven through Wootton Bassett, near RAF Lyneham, in Wiltshire.

On Monday troops in Helmand province held their own memorial to the men.

The head of the Army, General Sir Richard Dannatt said the men had not died in vain.

The families of the men were at the RAF base to see the coffins, draped in Union flags, carried from the C17 aircraft.

A private ceremony at the chapel of rest will be held, before the hearses drive through the town....

Five of those who died in Helmand on Friday were members of the County Down-based 2nd Battalion The Rifles.

Corporal Jonathan Horne and Riflemen William Aldridge, James Backhouse and Joseph Murphy were rescuing comrades from an explosion when they were killed in a second blast.

At the time, Rifleman Murphy was carrying Rifleman Daniel Simpson who had been injured by the first bomb.

Also returning on Tuesday will be the body of Cpl Lee Scott, of 2nd Royal Tank Regiment, who died in a separate explosion on the same day.

The people of Wootton Bassett have turned out repeatedly to pay tribute to the UK's fallen...(here)

To learn more of these heroes, go to the MoD site here.

Remember the families of these bravest and best that Britain has. Remember - and honour - these names and faces.

My prayers go out to the family and friends of each of these Heroes. May GOD hold them closse and grant them Peace at this most difficult time.