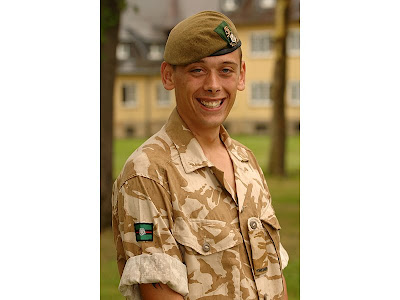 A 20-year-old soldier from 1st Battalion The Yorkshire Regiment (1 YORKS) has been recognised in front of his battalion, friends and family for his courage during a battle with the Taliban in Afghanistan.

During a recent medal parade at 1 YORKS base in Munster Germany, when soldiers from the battalion were being presented with their Iraq campaign medals, Private Andrew Troup had his Mention in Dispatches read out for his actions while on operations in Afghanistan.

Private Troup was deployed to Afghanistan during the winter of 2007 – 2008, working as part of an OMLT (Operational Mentor and Liaison Team) providing military training to the Afghan Army.

His Mention in Dispatches was awarded for his actions during a patrol, consisting of six British and 28 Afghan soldiers, which was ambushed from a number of firing points to the front and flanks. Some of the inexperienced Afghans fled to a safe location creating a loss of morale in what seemed to be an overwhelming enemy ambush.

Private Troup's Mention in Dispatches explains what he did next:

"Despite heavy fire he broke cover, sprinting to where they had gone to ground. Through strength of character, a powerful and courageous display of determination - brought them back into the fight. This single act of bravery allowed the Afghans to regain composure and have the will to fight."

Members of 1st Battalion the Yorkshire Regiment parade at their Barracks in Munster, Germany, on the day of the presentation of their Operation TELIC 13 campaign medals
[Picture: Corporal James Williams RLC, Crown Copyright/MOD 2009]

Private Troup said he volunteered to go to Afghanistan because he missed out on Iraq as he was too young to go at that time.

Explaining his brave actions, he said:

"I had to go and get them back and bring up the morale of the others despite not speaking the language or having an interpreter with me."

The ensuing contact lasted a further several hours with reinforcements arriving and forcing the Taliban to retreat....

There is more about this hero here.

Thank you for your service, Private Troup.
Posted by The Brat at 12:57 AM