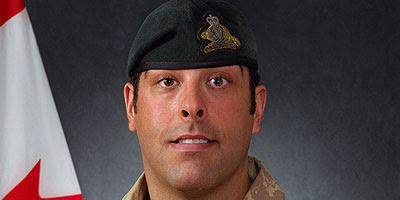 On June 23, 2009, MCpl Michaud was seriously injured when an improvised explosive device (IED) detonated near his dismounted patrol in Panjwayi District, southwest of Kandahar City.

MCpl Michaud was initially evacuated by helicopter to the coalition medical facility at Kandahar Airfield and subsequently moved to the Landstuhl Regional Medical Centre in Germany. Transferred to a local hospital in Québec, on June 28, he succumbed to his injuries on July 4, at approximately 2 p.m. EDT.

MCpl Michaud was serving as a member of the 2e Batallion, Royal 22e Régiment Battle Group in Kandahar, Afghanistan. This was his third operational tour and second to Afghanistan.

Her Excellency the Right Honourable Michaëlle Jean, Governor General and Commander-in-Chief of Canada, issued the following statement upon being informed of the death of MCpl Michaud:

... Their courage knows no limit; they are totally focused on finding and neutralizing as many of the deadly devices as possible, on insuring the security of the area, on protecting civilians as much as is humanly possible. That is their first and foremost mission.

“Master Corporal Michaud is one of the courageous, and without a doubt, generous soldier whose sense of duty and ability to keep going despite all adversity command our admiration for the women and men serving in the Canadian Forces. ...

MCpl Michaud, known as “Chuck”, leaves behind his wife, Alexandra, his parents and a brother. (source )

And Cpl Michaud was remembered in Kandahar:

About 150 comrades of the fallen soldier attended the brief morning ceremony at battlegroup headquarters.

Cholette said everyone in Kandahar had assumed the soldier, despite his terrible injuries, was going to pull through, and word of his death hit hard.

"All his colleagues were sure that everything was going to be OK," Cholette said.

"Learning the news was a shock; it's not easy for the troops."...

Cholette said Michaud was known to be dedicated and disciplined, and in strong physical shape. He was faithful in his duty and much appreciated, the padre added.

"We're going through a time of mourning here," Cholette said.

"It's important for all the troops to emphasize the fact that we appreciate him."(CTV here)

Remember and honour this hero, his life and his sacrifice.
Posted by The Brat at 7:06 PM